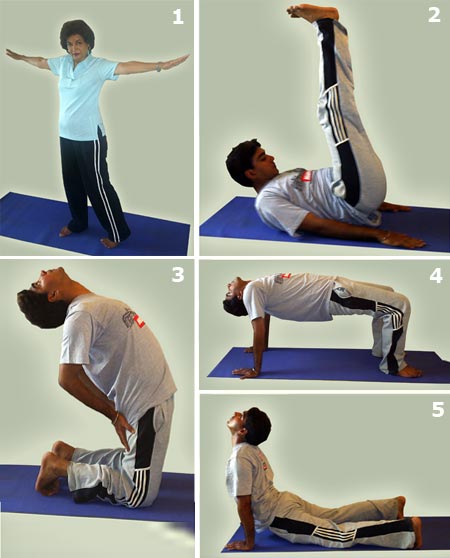 Tibetan Yoga comprises of 5 simple ancient rejuvenating methods; with yogic exercises known as Tibetan Rites. These 5 Tibetan Rites are also referred as The Five Rites, The Five Tibetans and The Five Rites of Rejuvenation. Tibetan yoga helps to supercharge your energy centers and live a new life again. The advantages of practicing Tibetan Yoga are not just one or two, but many, as it helps to maintain youthfulness and vitality – which boosts energy levels, sharpen the mind, helps becoming more calm and patient, improve health and well-being. And the plus point of practicing Tibetan Yoga is that there is no place or location constraint; it can be practiced anywhere.

In the 1930’s there was a retired British army named Colonel Bradford, 73, from Southern California who heard that Tibetan Lamas remain young and healthy. He was curious to know the secret behind their youthful, healthy living as he was ailing from backache and arthritis. He lived with the lamas for almost 2 years and practiced yoga and also ate the Tibetan food which complimented to his ailment. That’s when Bradford found these five Tibetan rites which can be practiced by anyone within few minutes. He was cured of all his ailments and started looking 30 years younger. Thus, Col. Bradford is considered to be the one who brought Tibetan Yoga to the western countries.

Later Peter Kelder who was Colonel Brad ford’s friend and a writer by profession learned about it and thought of writing a book, which got published. It is known as “Ancient Secret of The Fountain of Youth.” It was a super seller during that time around 1930’s. Thousands of copies were sold. Peter basically wrote this book to make everyone know the secret of youthful living. In the book, Col. Bradford shared his experiences starting from his journey from America to the hidden Shangri-La Mountains discovery of the five Tibetan Rites. The secret was revealed for regaining youth, vitality, of being cured of depression, arthritis, backache, diabetes, digestive, respiratory and heart problems.

HealthJockey got to know more about the 5 secrets of the lama’s yoga for eternal youth from Rustam and Razia Patel, a husband-wife duo, who have been teaching and conducting Tibetan yoga workshops since 6 years all over India and abroad. Rustam and Razia Patel came to know about Tibetan yoga through a friend who had recovered astoundingly from 3 severe heart attacks. He in turn got to know about it via a devotee in the ashram of Ganeshpuri, located in the borders of Maharashtra state in India.

Rustam has learnt the skills involved in yoga from Swami Dhirendra Bhramachari for 8 months in Kashmir and learnt ashtang and hatha yoga for a year from the world renowned yoga teacher Iyengar. Born and brought up in Nairobi, Razia who was an ex-airline stewardess, recently passed the training of trainers test for Tibetan yoga from the US. Razia has also learned Ashtang yoga and meditation from Swami Muktananda in an ashram in India and is a certified meditation teacher, teaching Siddha Yoga meditation since 15 years all over India.

Razia says, “I am ready to share this great secret, a great gift of God to anyone and anywhere to make people live for more years giving a younger look.”

Razia practices in 6 ways – one is positive thinking, second is pranayam, third is Qi gong exercise, fourth is stretches, fifth is the 5 Tibetan Rites and last but not the least is meditation.

Razia’s aim is to cure the pain and aches in those who are suffering and are willing to get well with a positive attitude. Her kind thoughts for the well-being of others have been fruitful to others. After learning Tibetan yoga she wants that people should feel happy, healthy, young and energetic so as to work efficiently in their jobs and live life to the fullest.

How do these rites actually function in our body system? Speaking about this, Razia said that these rites work on the energy centers of the body which are known as the 7 Chakras. These energy centers are located from the crown of the head till the base of the spine. These five Tibetan rites help to balance the 7 spinning chakras in the body. Through these exercises, the endocrine glands get stimulated, regulating the different organ systems in the body. These 5 rites work on 4 systems in our body like cardiovascular system, respiratory system, digestive system, nervous system. When we are young these chakras tend to rotate very fast which allows the prana-shakti known as the life force, allowing to flow freely in our body keeping us in good health. But as you grow older and if you have an unhealthy or irregular lifestyle then these chakras either slow down or get blocked, which invites early old age and sickness in the body.

Students are benefited as this form of yoga helps them to increase their concentration level and enjoy a powerful memory resulting in flying colors in their exams. According to Razia, call center personnel should learn Tibetan yoga as they have an irregular pattern of working because of the changing shift patterns. They can concentrate well and work efficiently. Instead of a “coffee break” people should opt for the 5 to 10 minutes stretching exercises which Razia suggests would relieve them from backache and stress related ailments within days. The 5 rites are highly energizing exercises which were developed over centuries in the monasteries of Tibet. These 5 rites were the secret for the long life of the godly Lamas.

There are several returns in learning and practicing the 5 Tibetan Rites. It helps to reduce muscular tension, stress and tiredness. It is excellent for stress management as it distresses you periodically so that you do not feel the effect of stress on you, keeping your body strong.

Razia says, “Learn to live with stress as stress is here to stay. So we have to learn how to live with it, so that you can survive for many more years working in the stressful condition.”

It helps to bring under control diabetes, hyperacidity, hyper tension, spondylitis, arthritis, neck pain and joint pains making the bone structure strong so that in future you don’t get osteoporosis. It even helps maintain weight and boosts the self confidence in you.

Tibetan yoga is different from other forms of exercises. Talking about gymnasium, aerobics or traditional yoga all of these have their own plus and minus points when compared to Tibetan yoga. For instance, a gym would be a great deal for the young and healthy people. But people who are sick or old cannot follow the regime of a gym whereas Tibetan yoga doesn’t hold such constraints. For a gymnasium or an aerobic class an individual will have to shell out a large amount of fees every month whereas in Tibetan yoga it’s just a one time investment which is very minimal for any individual to afford.

Now-a-days, commuting to go to the gym or an aerobic class too has become a hassle for many. The traditional yoga has hundreds of asanas which cannot be learnt in a week’s time. It at least takes a minimum of 6 months or even a year to learn and practice it. An individual would opt for aerobics because he or she would wants to lose weight faster and also to make the muscles strong whereas in Tibetan yoga, weight management happens automatically with the 15 minute routine exercise.

The cost structure to enroll for an individual is Rs. 700, which is a 1 day workshop for 3 hours and 1 CD is given to guide them for their daily practice. Thus Tibetan yoga and meditation can be followed through the instructions personally given by Razia Patel.

Some key points should be kept in mind when you plan to do the Tibetan yoga. They are as follows: