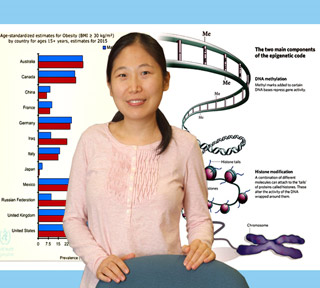 Quite a few individuals may be aware that obesity elevates risk of cardiovascular disease and diabetes. Experts from the Medical College of Georgia claim that a fat associated with chemical changes in the DNA can explain the reason behind the increased risk for chronic problems due to obesity. The research findings can probably help distinguish people under a threat of developing heart diseases and also treat them.

Investigations comparing obese and lean teens have apparently noted higher levels of chemical change, or methylation, in a portion of the UBASH3A gene. However, the TRIM3 gene may have lower levels of the chemical change, or methylation. Known to be involved in controlling the immune system, both the genes appear dysregulated in obese individuals. It is believed that a level of chronic inflammation playing a role in diseases like cardiovascular disease, diabetes and cancer, dysregulates the genes. Scientists were unable to determine the exact site where this dysregulation occurs. Identifying this region can possibly aid in crafting medications, that correct disease pathways.

In the current research, investigators laid hands on two sites in the UBASH3A and TRIM3 gene. It was pointed out that fat leads to DNA alterations or vice versa. Such modifications in the DNA supposedly contribute to the immune dysfunction associated with obesity. Dr. Xiaoling Wang, genetic epidemiologist at the Medical College of Georgia’s Georgia Prevention Institute, and colleagues presume that factors such as fitness, body shape and environment are predictors for related disease. It was concluded that DNA methylation at two gene sites may play a key role in obesity-related disease.

The research is published in BMC Medicine.