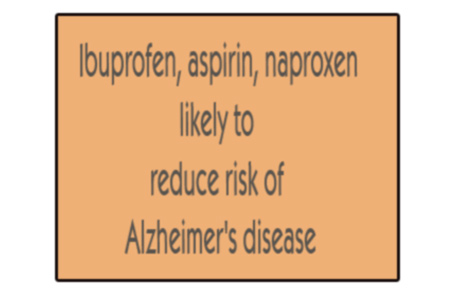 The various non-steroidal anti-inflammatory drugs (NSAIDs) like ibuprofen, naproxen, and aspirin, all have the similar amount of effect in reducing the risk of Alzheimer’s disease, says an extensive study held and published in the May 28, 2008, online issue of Neurology, the medical journal of the American Academy of Neurology.

Some of the experts had a rigorous discussion on a group of NSAIDs analyzing whether it contains ibuprofen which is beneficial, compared to another group which has naproxen and aspirin.

The researchers examined the data from six studies on NSAID conducted on 13,499 people who did not have dementia. Over a period of time it was found through these six studies that 820 participants developed Alzheimer’s disease.

The findings of the research were that people using NSAIDs had 23 percent lower risk of developing Alzheimer’s disease than those who never used NSAIDs. The reason for the reduction did not seem to rely on the type of NSAID taken.

“This is an interesting finding because it seems to challenge a current theory that the NSAID group which includes ibuprofen may work better in reducing a person’s risk of Alzheimer’s,” said study author Peter P. Zandi, PhD, with Johns Hopkins Bloomberg School of Public Health in Baltimore, MD. “The NSAID group that includes ibuprofen was thought to target a certain type of plaque in the brain found in Alzheimer’s patients. But our results suggest there may be other reasons why these drugs may reduce the risk of Alzheimer’s.”

Chris Szekely, PhD, who led the study, with Cedars Sinai Medical Center in Los Angeles, said that the disagreement in the studies such as this one and the depressing clinical trials of NSAIDs in healing or preventing Alzheiner’s disease need further studies.