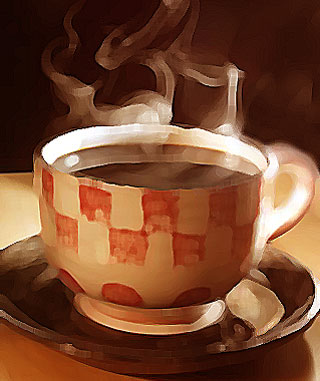 Well, atleast it is not responsible for any “increased rate of deaths”.

“Coffee consumption has been linked to various beneficial and detrimental health effects, but data on its relation with death were lacking,” says Esther Lopez-Garcia, PhD, the study’s lead author. “Coffee consumption was not associated with a higher risk of mortality in middle-aged men and women. The possibility of a modest benefit of coffee consumption on heart disease, cancer, and other causes of death needs to be further investigated.”

The researchers studied 84,214 women for the Nurses’ Health Study and 41,736 men for Health Professionals Follow-up Study. The criterion for volunteers to participate was that they had to be free from cancer and heart disease while taking part in the study.

The study participants had to fill in questionnaires that had questions on how many times a day they drank coffee, other diet habits, smoking, and health conditions. The study during the follow up period (1980 to 2004) involving 84,214 women revealed that women who consumed two to three cups of caffeinated coffee per day had 25 percent lower risk of death from heart disease than the ones who did not drink coffee. Also the women had 18 percent lower risk of death caused due to health issues other than cancer or heart disease in comparison with non-consumers, during follow-up.

Mean while in 41,736 men that were studied in the follow-up period (1986 to 2004), there was no significant impact of coffee in death risk, both in coffee drinkers and non-drinkers.

Other than cancer and heart diseases, researchers also calculated the death rates by accounting risk factors like body size, smoking, diet, and specific diseases. It was found that coffee-drinkers were less likely to die during the follow-up period. The reason behind this is given as the lower risk for heart disease deaths among people who consume coffee.

However, researchers have not found any association between cancer deaths and caffeine. Even the people who drink de-caffeinated coffee had lower death rates than the ones who did not drink coffee.

The study has been published Annals of Internal Medicine. However editors of the journal warn that the study does not imply that drinking coffee decreases chances of dying sooner than expected. There can be other factors as well that help coffee drinkers live a disease free life as well as no study can be perfect as there can some measurement error in the assessment of coffee consumption as the participants self-reported there coffee-drinking habits.