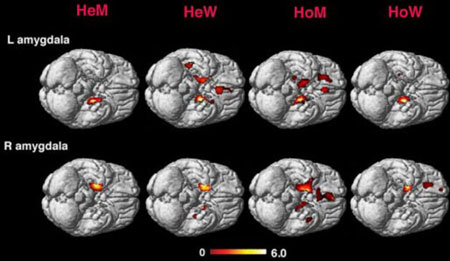 Popes and scientist can put their debate on homosexuality to rest. While priests argued that homosexuality was a matter of choice and a sin, scientists were still finding a reason behind the ‘similars attract’ phenomena in homosexuals.

Finally a simple discovery resulting from brain scan has unveiled the reason behind the same sex attraction in gays and lesbians.

It has been found that shape of the human brain is the reason behind an individual’s sexual orientation. Scientists at the Stockholm Brain Institute in Sweden conducted a research on 90 individuals – 25 straight men and 25 straight women and 20 homosexual men. It was discovered that the shape of brain in straight men was similar to that of lesbian women while that in the brain of straight women matched the shape of gay men. Like wise they share similar wavelengths too.

The 90 participants had to go through MRI scans. The scan revealed that the brains of straight men and lesbian women were asymmetrical with the cerebrum in the right hemisphere being larger than in the left. Meanwhile, the brain of gay men and straight women had similar brains.

The Cerebrum is the largest part of the brain which is responsible for thought, sensory processing, movement and planning.

After the MRI scans were done, researchers scanned the measure of the blood flow to the amygdala in the brain. Amygdala is the part of the brain that controls emotions, fear and aggression.

“The observations cannot be easily attributed to perception or behavior,” note researchers from Sweden’s Karolinska Institute. “Whether they may relate to processes laid down during the fetal or postnatal development is an open question.”

Neurologist Ivanka Savic-Berglund, study author notes that such development in the brain can only happen in the foetus and in early infancy and that no pshychological or environmental factors can influence them. “The results cannot be primarily ascribed to learned effects, and they suggest a linkage to neurobiological entities,” she said.

Studies in the past subjected the gay individual’s responses on whom they find more attractive. However these studies weren’t as helpful as the recent one since the study by Stockholm Brain Institute excludes all external factors like cognitive tasks or the way they rate others on attractiveness. In the latest study the focus was directly on the structure of the brain.

At least now the whole fracas will end, and gays will not be ridiculed for the shape of the brains, hopefully!

The study is published in Proceedings of the National Academy of Sciences journal.