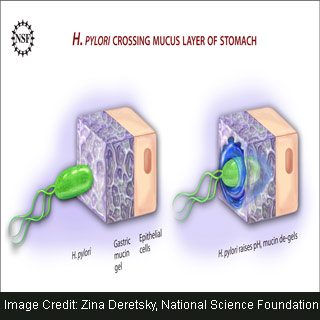 A group of researchers recently discovered the changes which seem to be a long example about how bacteria passes through soft gels. The researchers were from Boston University, Harvard Medical School and Massachusetts Institute of Technology.

Helicobacter pylori are known to be a bacterium which occupies various areas of the stomach where it causes chronic, low-level inflammation. In addition, it appears to be associated with gastric ulcers and stomach cancer.

It was believed that in order to colonize the stomach, H. pylori should be able to cope with highly acidic conditions in which other bacteria are unable to survive. However, it is recognized that the bacterium seems to achieve this by producing ammonia in order to neutralize the acid in its environment. Furthermore, recently published research shows that it seems to do something else i.e. it changes its surroundings in order to allow freer movement.

Researchers demonstrated that the bacterium which causes human stomach ulcers could perhaps be using an intellectual biochemical approach in order to modify the physical properties of its surroundings. Apparently, this permits the bacterium to move and survive and further take over its host.

Supposedly, acidic conditions inside the stomach also function against the bacteria’s ability to move freely. This is because of a protein called ‘mucin’ which is known to be an essential component of the protective mucus layer in the stomach. In the presence of acid, mucin is noted to form a protective gel. This gel appears to act as a physical barrier which prevents harmful bacteria from reaching the cell wall.

But, H. pylori could perhaps increase the pH of its surroundings and change this ‘mucin’ gel into a liquid. Allegedly, this activity allows the bacterium to swim across the mucus barrier, establish colonies, attack surface cells and form ulcers.

Boston University physicist Rama Bansil, working as a Division of Materials Research program manager at the National Science Foundation stated that, “Bacteria ‘swim’ through watery fluids using their tails to propel them. But it was not obvious how they move through a soft gel like mucus.”

With the help of video microscopes, the researchers found that when mucins extracted from mucus were in a liquid state, the bacteria were able to swim freely. However, when mucins were in a gel state, the bacteria seemed to be stuck, even though their tails were rotating. Further advanced imaging techniques revealed that pH appears to change directly and seems to be associated with the ability of the bacteria to move. For instance, the higher the pH, the greater the movement.

“This study indicates that the H. pylori, which is shaped very much like a screw, does not bore its way through the mucus gel like a screw through a cork as has previously been suggested. Instead it achieves motility by using a clever biochemical strategy,” says Bansil.

Researchers anticipate that their work may perhaps pave the way for future studies in native mucus and live animals in order to create strategies for preventing H. pylori infection. Apparently, such researches could be vital to the design of novel therapeutic approaches which prevent the bacteria from colonizing in the initial situation. Moreover, it could perhaps be considerable to the broader question of bacterial infections in mucus linings in other organs.

The findings of the research have been published in The Proceedings of the National Academy of Sciences.