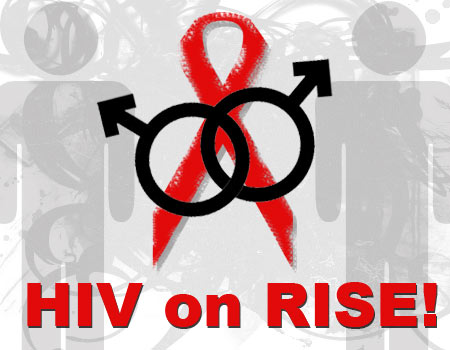 Homosexuals have constantly been warned about HIV and sexually related risks, now as per the new analysis, HIV diagnoses among homosexual men or men who sleep with men display a very grave picture. The analysis noticed a 12 percent rise in HIV, the analysis studied group of U.S. boys and men aged 13 to 24.

During the years 2001 and 2006, HIV transmission was top-most in men who had sex with men (MSM), according to a report from Centers for Disease Control and Prevention (CDC). A rise of 12 percent seems to be a very scary situation.

“To reduce transmission of HIV among MSM of all races/ethnicities, prevention strategies should be strengthened, improved, and implemented more broadly,” CDC health officials wrote in their Morbidity and Mortality Weekly Report.

The most likely reason speculated in this analysis was, most of the men were bisexual and sleeping with both sexes might be the reason for the rise in HIV/AIDS and sexually transmitted diseases. Prevention and safety is the only way to curb the rise in the HIV infection. Even regular testing and awareness plays a very important role in keeping the infection away.

Out of the 214,379 diagnoses during the study period, 46 percent were among MSM. The report checked upon trends in diagnoses of HIV/AIDS in 33 states that have confidential, name-based HIV case reporting.

June 27th is nearby, which is marked as National HIV Testing Day and to ensure proper testing method have been followed Centers for Disease Control and Prevention plans on setting up testing sites in 23 geographic areas with the largest number of HIV cases. To know more about the testing sites log in to www.hivtest.org.