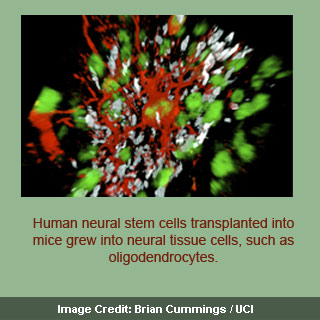 Prior investigations were seemingly focusing on the acute, or early, phase of spinal cord injury. The early phase of this injury is assumed to be a period of up to a few weeks after the initial trauma when drug treatments can lead to some functional recovery. In the course of the research, scientists claimed to build up mobility in the later chronic phase. This phase may be the period after spinal cord injury in which inflammation has stabilized and recovery has reached a plateau. It was ascertained that at present there are no drugs which help restore function in such cases.

“Human neural stem cells are a novel therapeutic approach that holds much promise for spinal cord injury. This study builds on the extensive work we previously published in the acute phase of injury and offers additional hope to those who are paralyzed or have impaired motor function,” commented Anderson, associate professor of physical medicine and rehabilitation and anatomy and neurobiology at UCI.

The researchers transplanted human neural stem cells into mice 30 days after a spinal cord injury that caused hind-limb paralysis. The outcome was that the cells differentiated into neural tissue cells like oligodendrocytes and early neurons. These cells then seemingly migrated to spinal cord injury sites. After three months of the initial treatment, the mice displayed a considerable and persistent recovery of walking ability in two separate tests of motor function than the control groups.

The research was published in the open-access, peer-reviewed journal PLoS ONE and is available online.