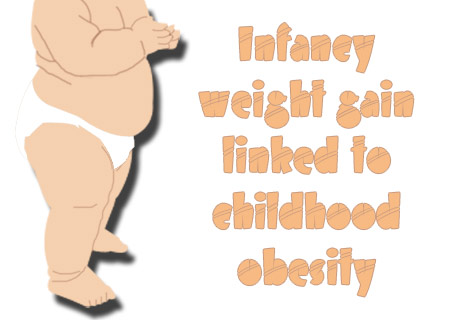 Innumerable attempts have been made to uncover the reason behind the increasing rates of childhood obesity. Over the years, it has been known that sedentary lifestyle and consumption of processed food stuffs play a significant role increasing the rates of obesity among both, children and adults alike. However, a latest study has uncovered additional data stating that the symptoms of childhood obesity may be traced to as early as infancy. This study was led by the experts from the Department of Ambulatory Care and Prevention, Harvard Medical School and Harvard Pilgrim Health Care; and Children’s Hospital Boston.

These experts have stated that after birth, immediate weight gain in the initial few months may increase an infant’s risk of obesity by the age of three. This study was said to have withdrawn information provided by an on-going study which was conducted on more than 2,000 pregnant women and children. For the purpose of this study, the investigators analyzed only about 559 pregnant women and children.

“There is increasing evidence that rapid changes in weight during infancy increase children’s risk of later obesity. The mounting evidence suggests that infancy may be a critical period during which to prevent childhood obesity and its related consequences,” says Lead author, Elsie Taveras, assistant professor in the Harvard Medical School Department of Ambulatory Care and Prevention.

A strong link was said to have been observed between infant weight gain and later obesity. In order to properly understand this link, Taveras says that they need a better understanding of the mechanism of this association. Having said this, it was also stated that the accumulated information clearly revealed that early interventions could be of great help against obesity in the long run.