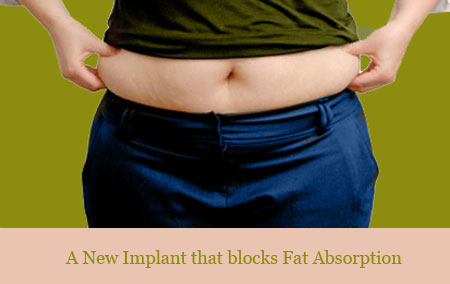 Many of us are on the war zone to battle the ugly fat and nasty flab on our bodies. We ensure that our diet is well maintained and also buy expensive products that promise weight reduction and toning. But there are some who in spite of trying all methods continue to lose the battle and succumb to fat and flab. For the ones who have given up on the battle-ground or have reached a stage of obesity, here’s a gift from technology and medical science which is an implant that blocks fat absorption, thus leading to reduction in obesity and fat.

The new implant claims to replace the painful and expensive surgeries that promise to eliminate fat off your body. During a six month open trial which involved three medical centres in Australia, Mexico and Norway, 31 obese participants who received the vagal nerve-blocking device, lost nearly 15 percent of their excess weight. A quarter lost more than 25 percent, and three patients had cut down their weight by more than 30 percent.

Michael Camilleri, a Mayo Clinic gastroenterologist was the brain of the study, who designed the study and his previous work and know-how contributed to development of the device in collaboration with EnteroMedics. Michael aimed at providing an easier way out from obesity and he came up with this innovative idea which puts a stop to fats.

“For this study, we wanted to get an initial assessment of whether blocking the vagus nerve electrically could cause obese patients to feel full after a normal-sized meal,” Camilleri explained.

“Patients were not put on any restricted diets or given counseling that typically accompanies gastric banding or bypass. We wanted to determine how much weight loss could be attributed to the device alone.”

The vagal nerve blocking device works similarly like a Pacemaker, the device uses high-frequency electricity to block the nerve impulses between the brain and the stomach and pancreas. This device is intelligent to block the fat absorption which can definitely help plenty of them who are tired of looking at their nasty fat and flab hanging from their waist. Of course! The device seems to be only a support system to block fat absorption, but the existent fat would have to be burnt with the help of proper exercise.