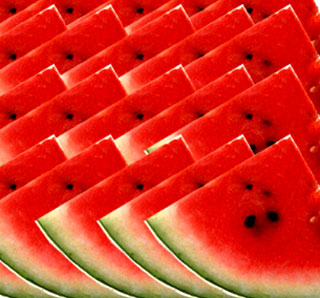 There are various aphrodisiacs in nature that we are still not aware of. One of this happens to be Watermelon! Surprised?

The researchers at Texas A&M’s Fruit and Vegetable Improvement Center in College Station have made a wonderful discovery that may help cure erectile dysfunction besides increasing libido.

So Watermelon seems to be the new Viagra on the block!

“The more we study watermelons, the more we realize just how amazing a fruit it is in providing natural enhancers to the human body,” said Dr. Bhimu Patil, director of Texas A&M’s Fruit and Vegetable Improvement Center in College Station.

“We’ve always known that watermelon is good for you, but the list of its very important healthful benefits grows longer with each study,” according Patil.

Watermelon and other fruits and vegetables contain in them phyto-nutrients which are bio-active compounds that benefit human health.

Enzymes like lycopene, beta carotene and phyto-nutrients are known to be present in Watermelon. The most important of the phyto-nutrients is the citrulline which has amazing positive effects in our body like relaxing the blood vessels much like that of Viagra.

This citrulline gets transformed in arginine after combining with certain enzymes in our body after watermelon is consumed. Arginine, an amino-acid that not only that helps blood circulation and boosts immune system but is also excellent for heart.

“The citrulline-arginine relationship helps heart health, the immune system and may prove to be very helpful for those who suffer from obesity and type 2 diabetes,” said Patil. “Arginine boosts nitric oxide, which relaxes blood vessels, the same basic effect that Viagra has, to treat erectile dysfunction and maybe even prevent it.”

“Watermelon may not be as organ specific as Viagra, but it’s a great way to relax blood vessels without any drug side-effects.”

Even though impotency is problem that may arise from a lot of psychological and physiological issues, a bit of nitric oxide yielded is always helpful for increasing the blood circulation and treating problems of the heart, high blood pressure and angina.

More over the Arginine also helps in removing ammonia and toxic elements in our body via the urea cycle.

Citrulline, the most important nutrient that makes watermelon the star, is found pre-dominantly in the rind of the fruit than in its flesh. Since the rind is often discarded, Patil and his colleagues Dr. Steve King and Hae Jeen Bang are developing new variants of the fruit that have higher concentration of citrulline in their flesh. Also they are on their way of discovering greater potentials the phyto-nutrients in watermelon hold.

According to Dr. Patil, the findings of their study have made them hail the watermelon as the ‘lycopene king’, a title earlier held by the humble tomato. Lycopene is a fat-soluble carotenoid having anti-oxidant properties that protect heart prostate and skin. Watermelons that are of the deep red type have higher concentration of lycopene and are the best ones to consume for better health benefits. 92 percent of watermelon is made up of water while 8 percent is lycopene.

“Lycopene, which is also found in red grapefruit, was historically thought to exist only in tomatoes,” said Patil. “But now we know that it’s found in higher concentrations in red watermelon varieties.”

“Previous tests have shown that lycopene is much better absorbed from tomatoes when mixed in a salad with oily vegetables like avocado or spinach,” Patil said. “That would also apply to the lycopene from watermelon, but I realize mixing watermelon with spinach or avocadoes is a very hard sell.”

“One final bit of advice for those Fourth of July watermelons you buy,” Patil said. “They store much better uncut if you leave them at room temperature. Lycopene levels can be maintained even as it sits on your kitchen floor. But once you cut it, refrigerate. And enjoy.”

Citrulline, lycopene, phyto-nutrients; Watermelon looks like a treasure chest full of essential elements. So enjoy the fruit in whatever way you can.