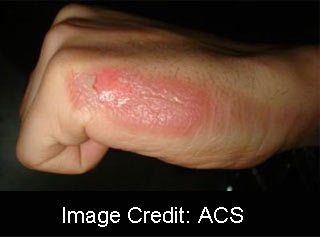 A novel and much safer alternative to the silver-based gels applied to the skin of burn patients are been spoken about in this article. Indian scientists have reported of the successful lab tests of a new topical antimicrobial formulation.

Silver sulfadiazine and silver nitrate were noted to be the helpful germ-fighters which seem to hold the ability to accelerate the healing process and save the life of burn patients. Silver nanoparticles were believed to be around 1/50,000th the width of a human hair. A description of the gel composed of these silver nanoparticles, which may be more effective than the custom gels, is believed to have been given by these experts.

Evidently, Kishore Paknikar and colleagues have stated that antimicrobial silver compounds have been used for years in the treatment of burn patients. These compounds were noted to have been used for those patients whose burnt skin may be susceptible to bacterial infections.

The presently used topical silver agents were stated to allegedly loose their positive effect in the body, due to drug-resistant bacteria, which could in turn lead to damaged cells or skin discoloration.

Seemingly, the new gel was shown to have successfully killed a number of potentially dangerous bacteria. It was even alleged to have killed the Pseudomonas aeruginosabacteria, which is believed to be one of the primary causes of burn infections.

More so, this particular gel evidently didn’t seem to give rise to any drastic toxic effects after its application on the healthy skin of animals. Apart from this, the gel was also believed to contain around 30 times lesser silver than silver sulfadiazine.

The obtained results evidently suggest that silver nanoparticles in the form of a topical antimicrobial formulation may prove to be a better alternative to the commonly used antimicrobial agents.

These findings are seemingly present in the issue of American Chemical Society’s Molecular Pharmaceutics.