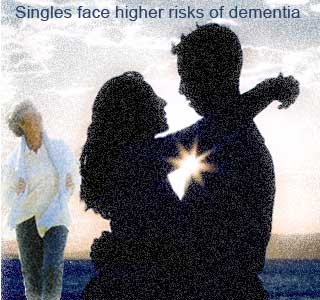 If you aren’t hitched and have been single for a long time, this news may baffle you. A recent survey by Swedish researchers at the Karolinska Institute has revealed that middle aged unmarried individuals or those without a partner are twice as likely to develop dementia as compared to individuals in a relationship.The study suggested that divorcees who remained single had three times more risk of dementia. An even greater problem could lie ahead for young widows who stayed single as they are six times more likely to suffer from dementia.

Krister Hakansson from Karolinska Institute in Stockholm, author of the study commented, “Cognitive and intellectual stimulation has been reported to be protective against dementia in general. Living in, a couple means that you are confronted with other ideas, perspectives and needs. You have to compromise, make decisions and solve problems together with someone else, which is more complicated and challenging. It is probably easier to get stuck in your own habits and routines if you live by yourself.”

He further mentioned “This suggests two influencing factors social and intellectual stimulation and trauma. In practice, it shows how important it is to put resources into helping people who have undergone a crisis. If our interpretation will hold, such an intervention strategy could also be profitable for society considering the costs for dementia care.”

Researchers closely analyzed 1449 Finnish people querying them twice about their mid-life relationship status. Questioned the first time in 1977 and then 21 years later in 1998, researchers found that about 139 of the total individuals developed different forms of cognitive impairment while 48 of them were diagnosed with Alzheimer’s disease.

The study suggested that those living alone are at a fifty percent higher risk of developing dementia later in life. The research further divulged that people with partners are less prone to the illness, even after other factors affecting dementia may have been eliminated. According to researchers, the prime reason for this could be social interaction between the couples. The study concluded that cognitive decline is significantly declined by a socially active life.

However singles need not lose hope. Adopting an active lifestyle like regular exercise, following a Mediterranean diet and staying away from cigarettes might help to reduce the risk of dementia.

Results of the study were released at the Alzheimer’s Association’s 2008 International Conference.