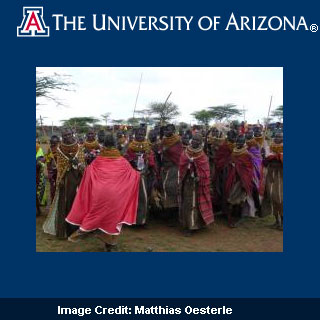 In parts of Africa long prone to violence, health of individuals seems to be of major concern. A study led by University of Arizona anthropologists intends to set up a framework for assessing nutrition and health in these low-intensity warfare regions.

The experts associated with the study claim to have been evaluating ethnic groups in rural northern Kenya for nearly two decades. They hope to gain a better understanding of how violence may probably be shaping the health of individuals living there.

Ivy Pike, an associate professor of anthropology at the University of Arizona, who has been analyzing the groups shares that their finding should provide a ‘conceptual framework that lays out the importance of methods and approaches to document violence’. These new results should also form the basis of the Global Response 2010 which is an international conference on violent conflict and health globally. Commencing on January 22, 2010, it sets the stage for humanitarian workers, physicians, political leaders and academicians working on violence and health.

In the past there appears to have been enough documentation of the social responses to current and chronic warfare among ethnic groups. However, very little data seems to explain the effects of conflicts on community health. The investigator has been examining three nomadic communities namely the Pokot, Samburu and Turkana that live in northen Kenya just like other groups. All pastoralists, they herd cattle, goats, sheep and camels between pasture and water.

Apparently the region has practically no infrastructure and literacy hovers at between 7 and 8 percent. Conflict between these groups for hundreds of years seems to have been mainly because of access to scarce grazing and water, and by livestock theft. Over the last several years, persistent drought has further raised tensions which seem to have been aggravated even more by the introduction of firearms, particularly automatic weapons in recent years.
Households studied by Pike in the early 1990s might have possessed military-issue rifles. By mid-decade, the investigator reveals that all had AK-47s.

“It’s easy to treat this violence as cattle rustling, but it’s much more complicated, with disparate impacts on people’s daily lives and health,” Pike mentioned. “We’re documenting nutritional change over time. That’s important because families that are nomads are very dependent on their livestock, so any shift in holdings or their animals’ access to food and water impacts food security.”

She further suggests that while young men appear to have been killed or wounded by gunfire in raids, women and children also face a significant load of the violence. Also men seem to have better health in general as they travel with herds and gain access to meat and milk resultantly. Women on the contrary seem to sacrifice their feed for their children. While older women were observed to protect young mothers, all women apparently skipped food when their children were hungry.

Women thus seem to become an important barometer of health and well-being. This, Pike shares could especially be true when their specific group has born the brunt of a violent attack. However still there appears to be almost no data on the association of violence and armed conflict to shifts in health. She further adds that following in this line of analysis may have numerous implications for a various under-developed and developing regions of the world. This could particularly point at the health effects in sub-Saharan Africa and Asia, where violence appears to have surged dramatically in relation to displaced populations.

The results of is currently published in a special edition of Social Science and Medicine, in collaboration with the British medical journal The Lancet and the Journal of the Danish Medical Association.