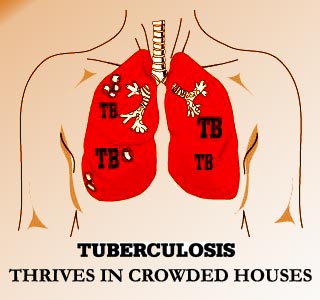 A recent research comprising of census data and notified tuberculosis cases over a five year period reveals that the dangers of the fatal disease is significantly associated with household crowding. While controlling other critical risk factors for TB, this study is the first of its kind to look at the effects of household crowding on TB in New Zealand or Australia.

Conducted by The University of Otago (Wellington), researchers found that the disease thrives in crowded houses. The study including 1,898 cases between 2000 and 2005 shows that TB is still an important infectious disease.

Associate Professor Michael Baker, lead researcher of the study, remarked, “While the focus of TB control is on prompt case detection and effective treatment, better housing conditions and reduced levels of crowding also have a role in controlling the spread of this disease. Unlike some previous studies, we were able to control for the effects of known risk factors, notably poverty and migration from high incidence countries. Linking to census data also allowed us to include a relatively large number of cases.”

He further added, “The finding that TB rates are associated with crowded living conditions fits with what we know about the transmission of these bacteria via small airborne droplets. Household crowding increases opportunities for active cases to infect other household members, particularly children.”

Young (under 40 years) New Zealand born population where TB was most likely to have been caused by a recent infection was particularly under the spotlight in this study. The study showed that in this group, for every 1 % increase in the average household crowding level of a neighbourhood, there would be an 8 % increase in the expected TB count. This was provided that other risk factors were assumed to be a constant. An expected 70 % higher TB risk was found in people living in the most crowded quintile (20 %) of neighbourhoods in comparison with those living in the least crowded quintile.

The study however was unable to determine the role of ethnicity as an independent effect on the risk of TB in New Zealand. Separate from low income and overcrowding, Dr Baker asserted that a further research, ideally an individual-based study in recently affected cases will be required to solve this query.

Presently, at least one third of the world’s population is infected by TB. With approximately, 10 percent of the global population progressing to the active disease, the study is sort of an eye-opener towards the awareness of this disease. Rising levels of drug resistance and the HIV epidemic have further worsened the impact of TB.