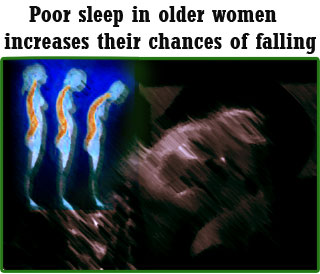 The latest report in the medical field reveals that poor sleep elevates the fall of risk for older women. Women aged 70 years or older who sleep less than 5 hours or less per night are more likely to have two or more falls in a given year according to the study.

Dr Stone commented, “Given that falls are so common in older adults and are a leading cause of mortality, morbidity, and premature nursing home placement, it is crucial for physicians to ask patients about sleeping problems and consider treatment options. This may be particularly important for women who have had a prior fall, which is one of the strongest risk factors for a subsequent fall.”

She further cautioned, “There is little evidence to determine whether improving sleep with newer, non-sedating sleep medications or behavioral therapy could reduce fall risk. These findings suggest that the association between the use of these medications and risk of falls among older adults may be in part explained by poor sleep, a possibility which has never been explored using objective measures of sleep.”

As part of the study, researchers examined 2,978 mostly community-dwelling women ages 70 and older (mean 83.5) in the larger Study of Osteoporotic Fractures. Equipped with a wrist actigraph, these women were measured for sleep and daytime inactivity for at least three consecutive 24-hour periods. They averaged 6.8 hours of sleep over a 24-hour period and slept 77.3% of the time spent in bed on average. A subsequent follow-up of 1 year showed 18.4% of the women fell at least twice as reported on a triennial questionnaire.

The team discovered that women who slept for five or fewer hours were significantly more likely to have at least two falls than those with the “normal” seven to eight hours a night. Women who slept for more than eight hours a night also had a tendency to increase the fall risk but did not score well in the multivariate analysis. Also women who had poor sleep efficiency of 70% or less were at a 1.36 times higher risk of falling as against those who spent a large period in slumber instead of tossing and turning.

The study additionally reveals that there was a 1.33 times increased risk of taking multiple tumbles for women who spent at least two hours awake after sleep.

No association was found between sleep quality and use of benzodiazepine sleep aides after controlling for total sleep time along with other variables. Also daytime catnaps seemed to have no effect whatsoever on the risk.

The study is published in the September 8 issue of Archives of Internal Medicine, one of the JAMA/Archives journals.