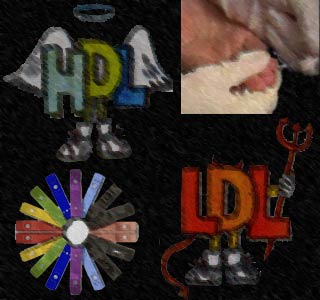 If you one of those carefree souls who hate visiting your physician, think again. A simple cholesterol check could be a lifesaver as high cholesterol levels in addition to diabetes, smoking, high blood pressure, and being overweight increases the risk of cardiovascular disease. This was revealed by Munich-based German Society for the Treatment of Lipid Disorders (DGFF).

Cholesterol is a component of all body tissues. Blood vessels can constrict dangerously leading to heart attacks or strokes due to “bad” cholesterol, commonly known by the abbreviation LDL. To stay healthy, it is very crucial that the level of this cholesterol is as low as possible. However an individual’s overall cholesterol level is not the only thing that should be measured.

On the occasion of Cholesterol Day in Germany, Professor Achim Weizel, the DGFF’s co-founder and first chairman, remarked, “It was important to determine the proportion of both ‘good’ and ‘bad’ cholesterol. If you’ve got no other risk factors (for cardiovascular disease), a level of 160 milligrams (mg) or less per 100 milliliters (ml) of blood is normal. Good” cholesterol or HDL helps prevent atherosclerosis by removing excess cholesterol from the body. Its level should be at least 45 mg per 100 ml.”

He further explained, “Lifestyle changes can bring down a high LDL level. You should lose weight, exercise more and keep to a Mediterranean-style diet – one that is low in fat and rich in fibre. Such a diet included healthy oils like olive oil and two meals of fish per week. If that doesn’t help, medications are the only alternative. People requiring medications were usually those whose high cholesterol level was genetic or about one in every 500.”

Cardiovascular diseases were the cause of nearly half of the deaths in Germany in 2006. A cardiovascular test may sound complex, but is not so. It just requires the physician to take a drop of blood from a vein. These days pharmacies also keep testing devices that uses blood from a finger prick.

Weizel mentioned that for healthy normal people with a normal cholesterol level a test every year or two was sufficient. A test every three months is necessary for others. It was also noted that six to eight weeks of regular exercise could increase the level of HDL in a person’s body.