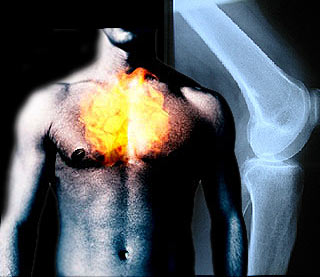 A novel Canadian study showed that there was a 44 % higher chance of hip fracture among those people who used such drugs for 5 years. Zanprol is one such drug used to treat indigestion. These drugs are called proton pump inhibitors, or PPIs. They may be available both on prescription and over the counter in low doses.

Researchers at the University of Manitoba in Canada examined more than 60,000 adults aged over 50, including nearly 16,000 who had suffered a fractured hip, spine or wrist due to osteoporosis. An analysis of the prescription record revealed that those with hip fractures were 62 per cent more likely to have used PPIs for five years or more than those with healthy hips. The risk of a fracture was increased by more than 400 % for those who were on the drugs for seven years or more.

Professor Chris Hawkey, president-elect of the British Society of Gastroenterology, remarked, “These are very safe drugs but there are some areas where they are probably overused, such as for minor indigestion.”

Patients with a more serious condition involving chronic heartburn namely, gastro-oesophageal reflux disorder are prescribed these drugs for up to two months. But it is a common observation that many end up staying on the drugs permanently in order to keep heartburn symptoms away.

Though it’s not very clear how the drugs might damage bones, a theory suggests that it could be due to blockage of acid production. In this condition, the body is prohibited from absorbing calcium needed to build strong bones.

For patients with severe stomach problems, such as bleeding ulcers, the risks of the drugs will certainly be outweighed by its benefits. However, researchers suggest that usage of the drugs routinely must be accompanied with medical advice.

The study has been published in the Canadian Medical Association Journal.