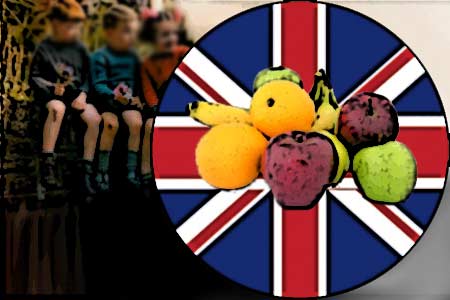 A novel report by the School Food Trust may astonish you. It states that one in seven British kids don’t eat fruits. Though surprising, the government-backed report revealed that upto 1.7 million kids in the UK never ate fruits.

The report asserted “Although, the term healthy eating is familiar to children, it is neither well understood nor applied in practice. Perceptions of which foods should be eaten in moderation and an understanding of balancing a diet appear to be weak.”

Health minister, Ivan Lewis further mentioned, “We know that families in some communities still use the corner shop on a daily basis for their food and household goods. It is therefore essential that we take healthy eating options to these stores and reach those families who are at the greatest risk of poor health due to a poor diet. It’s important that people have the opportunity to buy fresh fruit and vegetables where it is convenient for them.”

The shocking figure shows even the UK’s most favourite fruits namely apple and banana have never been eaten by 14 % of youngsters. The research claims that there were fewer chances of kids eating fruits at home in case they had been given free fruit at school. Instead of the recommended 5 fruits a day, a disturbing number of children believed that a healthy diet involves starving themselves.

With nearly one in three British children now regarded as overweight or obese, the report brings to light the poor diet of UK kids. Estimates show that by 2050, two in three children and 90 per cent of adults could be fat, risking heart disease and diabetes.

A recommendation of British MPs is that corner shops should get government cash to sell more fruit and vegetables. Also a large number of British 8 to 16 year-olds spend around £550 annually on sweets and crisps just on their way to and from school.