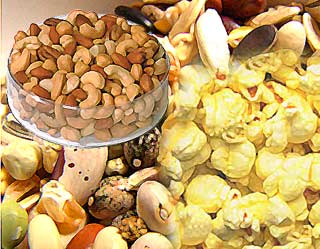 A common digestive disorder, diverticular disease is typically associated with popcorn, nuts and seeds. People with the colon disease are advised to keep off these foods so that they don’t get painful attacks. According to findings from the first large study that addresses this issue these foods may actually lower the risks of the condition.

Scientists used data from the ongoing Harvard School of Public Health study of male health professionals to examine the association of eating nuts, corn, and popcorn with diverticular disease. They analysed 47,228 study participants between the ages of 40 and 75 at enrollment. These volunteers had no history of diverticulosis, diverticulitis, or related diverticular complications. Every few years these men completed detailed questionnaires designed to examine the foods they ate and their health status.

“It is not exactly clear where this idea came from because there are no studies showing this to be the case. It just became a part of medical lore. This disorder is found in industrialized, western nations — nations where diets have low dietary fiber. In Africa and Asia it is very uncommon” mentioned Researcher Lisa L. Strate, MD, MPH, of the University of Washington school of medicine in Seattle,

Scientists thus assert that nuts, popcorn, and corn may actually decrease the Complications of Diverticular Disease

According to the National Institutes of Health about a third of Americans will develop small pouches of the colon by the time they reach age 60. With two-thirds having the pouches by age 85, millions of Americans are victims of the uncomfortable intestinal disorder. Often there are no particular symptoms for diverticulosis, but it is characterized by intense pain in the lower, left side of the abdomen and possible nausea, vomiting, cramping, and bleeding.

Believing that the findings may probably apply to women too, scientists advise reconsideration of earlier dietary recommendations. They however have a word of caution that this study was the sole study to disassociate nuts with diverticular disease.