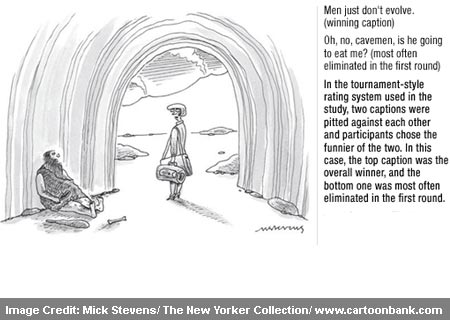 Good humor often goes a long way in lighting up the moment. Much to the agony of male humorists, a study by professionals from the University of California has shown that men are apparently funnier than women, but just in the eyes of other men. Women did not rate them with high points on humor.

This suggests a well known stereotype that a man’s humor is used innately to delight the opposite sex. Interestingly more than 90% of both male and female subjects affirmed the notion that men are funnier.

The study’s first author Laura Mickes, a postdoctoral researcher in the UC San Diego Department of Psychology and a Ph.D. graduate of the same department, expressed, “The differences we find between men’s and women’s ability to be funny are so small that they can’t account for the strength of the belief in the stereotype. ”

The study was divided into 2 parts. In the initial phase, 16 undergraduate male and 16 undergraduate females were told to write captions singlehandedly in a quiet room for 20 New Yorker cartoons in a span of 45 minutes. According to the instructions, they had to be as funny as possible.

In the second trial, 34 male and 47 female undergraduates had to evaluate the captions in a 5 round knockout tournament. One cartoon picture was displayed with 2 captions chosen randomly and anonymously, and the participants had to select the funnier one.

This process was repeated for all the 32 captions and the 16 winning captions were then compared. The number of rounds, out of 5, till which the captions survived determined the score of the writer.

The findings showed that men seemingly performed better than women but the margin was not very significant. They attained about 0.11 more points than the female counterparts. Another interesting aspect contradicting popular beliefs is that males were rated nearly 0.16 points higher on an average by other men, than females who gave 0.06 points more to male captions.

Further studies will gauge possible reasons for men being the funnier group. The findings are published in the journal, Psychonomic Bulletin & Review and are being used as a controlled version of The New Yorker cartoon caption contest.