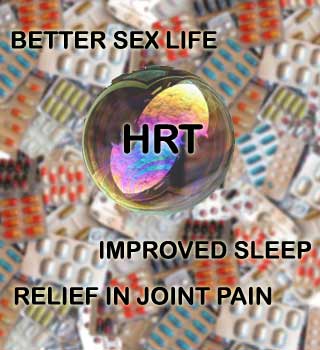 A widely known fact is that post menopausal women need a lift in love life. So if you are one of those suffering from bedroom blues, fret not, hormone replacement therapy (HRT) could just be the answer for you. A recent study suggests that even years after menopause women who undergo HRT have a better sex life. It could also help insomnia and aching joints.

Conducted on 2130 women in New Zealand, Australia and Britain, the study reveals significant benefits of HRT in the quality of life for post menopausal women. It found that women who take a combination of oestrogen and progestogen hormone therapy enjoyed a much better sex life along with improved sleep and lowered joint pain.

Lead researcher Beverley Lawton, director of the Women’s Health Research Centre at Otago University, New Zealand, commented, “There’s been a lot of fear about HRT almost approaching mythical proportions … but what this research shows is that for most women, the benefits outweigh the risks. However, seeing the benefits for those less-affected, it stands to reason that women with severe symptoms would have even more to gain from HRT.”

She further added, “Some said the loss of libido was like a light switch being turned off, but HRT restored it. It’s not Viagra, but the participants were quite delighted.”

The trial consisted of women with an average age of 62 years. Most of them were several years past menopause with few or no symptoms. After one year of HRT most of the women who had earlier complained of night sweats and hot flushes found no such symptoms. It also showed a noteworthy improvement in sleep, sexuality and joint pain.

The researchers claim that the recent study should put to rest the speculations surrounding HRT. HRT suffered a downfall after a 2002 study that linked long-term use with an increased risk of blood clots, breast cancer and heart attacks. New studies however reveal that HRT may lower the risks of heart diseases.

The study has been published lately on the British Medical Journal.