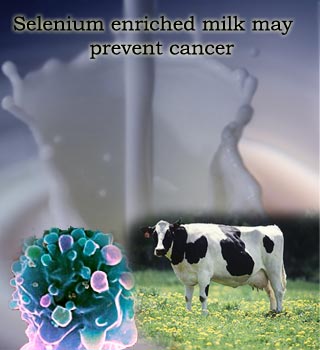 A recent study by a team of researchers shows that the natural trace element, selenium found in cow’s milk may have anti-cancer properties. The study has found that as against regular dietary supplements, cow’s milk enriched with selenium could play an eminent role in fighting bowel cancer.

The study was carried out by a team of researchers led by Graeme Young of Flinders University. The present study involving 20 healthy volunteers is trying to find out the maximum effects of selenium delivered to cells in the lining of the bowel. The human trial plans to explore the part played by cow’s milk in boosting the anticancer properties of selenium.

Professor Young quoted in the Sydney Morning Herald, “So those forms of selenium will differ in their capacity to change someone’s antioxidant status and capacity to prevent cancer. It just so happens that when you feed selenium to cows and they produce selenium-enriched milk, the selenium seems to be in a chemical form that is both highly absorbable into the body and also more effective in terms of preventing cancer”

The study involves the comparison of the milk form of selenium with a yeast form. According to the researchers, this will help them observe how readily they are absorbed as the chemical and yeast forms of selenium available over-the-counter have varying degrees of absorption and effects on the body.

Now underway, the study follows previous trials that confirmed the presence of selenium in milk to lift levels of selenium in the blood. The end of this year should see researchers with clear evidence on the role that the humble cow could play in boosting the anti-cancer properties of selenium.