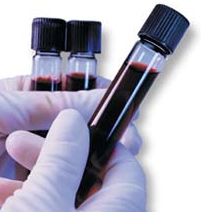 Researchers have developed a test that can help to detect liver cancer in its early stages. This test which requires just a simple blood sample was developed by VIB researchers who were connected to Ghent University.

Hepatocellular carcinoma (HCC) is the most prevalent primary form of liver cancer. Most often, the disease appears following a chronic inflammation of the liver as a consequence of a hepatitis B or C virus infection or even through cirrhosis of the liver.
Cirrhosis of the liver comprises a group of liver diseases in which the normal liver cells become damaged and are replaced by scar tissue.

A new test for detecting HCC was developed by Xue-en Liu, Liesbeth Desmyter and colleagues under the supervision of Cuiying Chen (Chitty) in collaboration with scientists in China. This test is based on previous work of Prof. em. Roland Contreras and Nico Callewaert.

By examining blood concentrations in Chinese patients with cirrhosis of the liver due to a hepatitis B virus infection, they found that the quantities of two particular sugar groups that appear on the blood proteins varied according to the stage of the disease.

Furthermore, these values correlated with the size of the tumour. The ratio of these values forms the basis of the new blood test. The researchers were able to make the correct diagnosis in 70% of the cases – a success rate that equals that of the AFP tumour marker currently being used in the clinic.

When the AFP test is used in combination with the new test, the accuracy of HCC diagnosis rises dramatically. The new test succeeds in detecting liver cancer in more than half of the patients with cirrhosis of the liver for which the AFP test provides no answer. This test would allow frequent and non-invasive analyses to be carried out on cirrhosis patients, which would enable scientists to detect liver cancer in an earlier stage and to closely monitor the development of the disease.

At the moment, the researchers are working on implementing this test for the diagnosis of liver disease in compliance with clinical practice. The new results concerning HCC diagnosis provide an extra incentive for pursuing this development as intensively as possible.