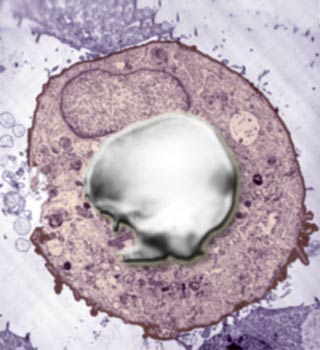 Blood calcium levels could possibly give inside information for deadly prostate cancer. That’s what a new analysis reveals. According to researchers, men whose bloodstream calcium levels fall in the higher end of the normal range have a greater chance of developing fatal prostrate cancer.

Around 19,000 Canadians are diagnosed with this fatal cancer every year. The second most deadly and common cancers among men, research suggests an estimate of one in eight men developing prostrate cancer in their lifetime. Conducted by researchers at the Wake Forest University School of Medicine and the University of Wisconsin, the study shows a strong association between blood calcium levels and prostrate cancer

Gary G. Schwartz, Ph.D., associate professor of cancer biology and of epidemiology and prevention at Wake Forest, remarked, “We show that men in upper range of the normal distribution of serum calcium subsequently have an almost three-fold increased risk for fatal prostate cancer. To our knowledge, this is the first study to examine prostate cancer risk in relation to serum calcium. These results support the hypothesis that high serum calcium, or a factor strongly associated with it, such as high serum parathyroid hormone, increases the risk for fatal prostate cancer”

Study co-author Halcyon Skinner of the school of medicine and public health at the University of Wisconsin added, “The take-home message is that this may offer a simple means to detect men who are at increased risk of fatal prostate cancer.”

The researchers closely examined 2,814 men who participated in the National Health and Nutrition Examination Survey (NHANES-1). An average of 9.9 years before prostate cancer was diagnosed, the measurement of the amount of calcium in the bloodstreams of these men was determined. Among the men, the scientists fixated on the 85 cases of prostate cancer and 25 prostate cancer deaths. The group was then divided into thirds, based on the serum calcium level.

Results showed that the upper third of NHANES-1 participants had high normal calcium levels, ranging from 9.9 to 10.5 milligrams per deciliter. A comparison of men in the top third with men in the bottom third revealed a significantly increased hazard for fatal prostate cancer. Even after adjusting for factors like age, weight, race and family history, the most well known prostate cancer risk factors, those in the top third group had 2.68 times the risk of developing fatal prostate cancer later in life as against those in the bottom third group.

Researchers however bring to notice that there is very little relationship between calcium in the diet and calcium in serum. Hence men don’t need to reduce their ordinary dietary intakes of calcium. Innumerable drugs are already available to lower calcium levels in the blood, and test is routinely ordered during checkups according to the authors of the study.

If the findings of this research do hold true, they can lead to an eminent pathway that predicts whether a man has a deadly form of prostate cancer or a tumour that doesn’t lead to worrying symptoms. The study is published in the September issue of Cancer Epidemiology, Biomarkers & Prevention, a journal of the American Association for Cancer Research.