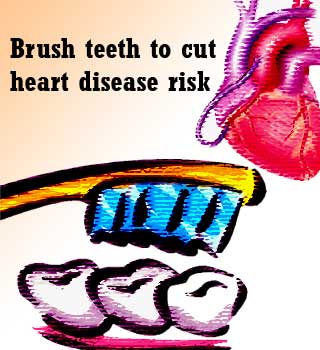 Incase you thought that your gums may have a very small part to play in your body functions, this novel news may just amaze you. A new research links gum problems to heart diseases. The study claims that brushing your teeth may cut your risk of a heart disease.

Conducted by researchers from the University Of Otago Dunedin in New Zealand, the study reveals that body has its own defence mechanisms which could react more strongly to the threat of gum diseases. These actually destroy its own protective cells.

Though previous studies have showed a relationship between gum diseases and the susceptibility of suffering from a stroke or a heart disease, the researchers were really not able to explain the association.

The team analysed the after effects of brushing on a group of people suffering from cardiovascular disease. These were people with conditions that could cause heart attacks and restriction or blockage of the flow of blood to vital organs.

The team was thunderstruck to find that that the body’s own defences could overreact to the threat of gum disease and destroy its own protective cells, which leads to a build up of arteries called atherosclerosis, a cause of heart attacks.

The other benefits of brushing are widely known. Dentists recommend regular brushing and flossing in order to protect a range of periodontal diseases. The most common cause of tooth loss in adults is building of plaque due to improper cleaning of teeth. But now there could be more to brushing your teeth – its much more than just protecting those pearlies from cavities.

The study has been presented at the Society for General Microbiology’s Autumn meeting at Trinity College in Dublin.