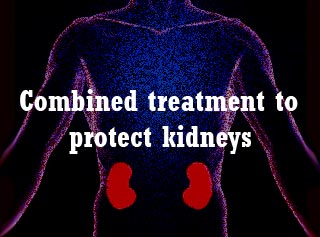 More than 250 million people around the globe suffer from diabetes. New ADVANCE (Action in Diabetes and Vascular Disease: Preterax and Diamicron MR Controlled Evaluation) findings may show how to combine intensive blood glucose and blood pressure lowering for further benefits in Type 2 Diabetes. The novel ADVANCE treatment has the potential to save lives and protect millions of diabetics from serious complications.

Initiated and designed by researchers at Australia’s George Institute for International Health, ADVANCE involved a group of independent medical researchers from 20 countries worldwide.

According to the new research, joint control of blood pressure and blood glucose can cut down serious kidney complications by a third among patients with type 2 diabetes.

“The combination of routine blood pressure (BP) lowering and tighter glucose control confers very substantial benefits with reductions of one third for serious kidney disease, one quarter for cardiovascular death and close to one fifth for death from any cause”, mentioned chief investigator John Chalmers of the George Institute for International Health, Australia.

He further added, “These results provide powerful incentives for the millions of people living with type 2 diabetes.”

For the study, the researchers analysed data of nearly 11,140 patients who were treated for diabetes. They were followed for five years. The results of the research confirm that the effects of the two treatments are independent of one another for all pre-specified clinical outcomes, suggesting that the separate effects of intensive glucose control and routine blood pressure lowering are fully additive.

Earlier studies have brought to light that tight control of blood glucose with a regimen based on modified release of gliclazide, an oral anti-diabetic drug actually reduced kidney complications. A fixed combination of two drugs namely perindopril and indapamide along with routine lowering of BP cuts down the risks of death along with risks of heart and kidney ailments.

The number of diabetics is estimated to rise to around 400 million in 2025. Providing even greater protection in the multi-factorial approach to treating diabetes, this new analysis of the joint effects of these two treatments could be a real lifesaver considering the diabetic epidemic.

These findings were presented on 8 September 2008 at the European Association for the Study of Diabetes (EASD) in Rome.