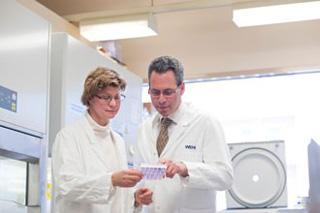 A recent research claimed that breast cancer metastasis is prevented by roots. Now, scientists from Walter and Eliza Hall Institute have shown that some of the most stubborn kinds of breast cancer appear to be more effective to a combined effect of chemotherapy and a new class of anti-cancer agent.

The aforesaid type called ABT-737 is one of a new class of anti-cancer agents called BH3 mimetics that aim to neutralize the Bcl-2 proteins in cancer cells. Bcl-2 proteins serve as a protector of cells after they have been impaired by chemotherapy medication, and prohibit the cancer cells from wearing out.

Investigators believe that BH3 mimetics showed assuredness for treating breast cancers that are inclusive of ‘triple negative cancers’. The latter are so called because they apparently show negativity for oestrogen, progesterone and HER2 receptors, and are seemingly untreatable with tastuzumab. They are responsible for about 20% of all breast cancers and are normally aggressive with weak outcomes.

“ABT-737 targets proteins from the Bcl-2 family, which are found at high levels in up to 70 per cent of breast cancers. We have shown that breast tumours that have high levels of Bcl-2 respond well to treatment with ABT-737 when used in combination with a conventional chemotherapy drug,” specified Dr Geoff Lindeman.

He further stated that navitoclax which is an orally-available BH3 mimetic appears to give new hope for treating certain breast cancers that are not presently used for other therapies. ABT-737 and navitoclax were uncovered by Abbott scientists and are related to the discovery of Bcl-2 being a ‘pro-survival’ protein resulting in prevention of cell death in healthy and harmed cells. They are not currently available for patient treatment, but the latter is undergoing phase II clinical trials to sustain its efficiency in treating some classes of leukaemia and lymphoma. Navitoclax is being collectively developed by Abbott and Genentech.

According to Dr Visvader, the combined influence of ABT-737 and docetaxel in mice with transplanted human breast cancer cells was apparently noteworthy. It seemingly enhanced tumor response and increased survival rates as compared to the singular working of docetaxel. When ABT-737 was administered as a single agent, it did not appear to be effective in treating cancers with high levels of Bcl-2, or cancers that did not express Bcl-2. This research puts forth that these agents tend to make cancer cells more vulnerable to chemotherapy. Researchers are positive for its use in the hardest basal-like breast cancer too. They are hoping to conduct a clinical trial of navitoclax in the near future.

The research is published in the Proceedings of the National Academy of Sciences USA.