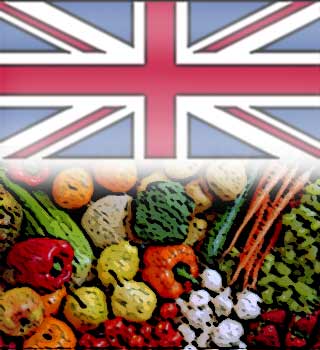 A shocking new research reveals that only 12% of Britons meet the recommended five-a-day target for fruits and veggies. The research indicated that a majority of people in Britain are also not eating enough fibre besides not adopting the five-a-day policy.

Conducted by the marketing group TNS, the research found that the Britons are eating a mere 2.5 portions daily of fruits and vegetables. In order to reduce the risk of cancer, heart diseases and other serious ailments, the Department of Health suggests that people should eat at least five portions of fruits or vegetables a day.

Giles Quick, managing director of TNS Worldpanel UK usage panels, reveals, “While the need for five a day seems to be common knowledge, the number of us who actually achieve this is shockingly low. There is some evidence that Britain is waking up to the importance of nutrition.”

For the research, TNS examined the spending habits of 25,000 households along with analysis of nutrition labels of 100,000 food and drink products bought from supermarkets by families. Surprisingly the research found that only 12% of the population is adhering to the target and 12% actually don’t eat fruits and vegetables at all. Even those who ate 2.5 fruits and vegetables a day showed a variation with gender, age and social class.

Those who were most likely to hit bull’s eye included individuals who were from more affluent families and above 45 years of age. Interestingly children and the low income group had higher chances of going off track. A questionnaire by the analysts revealed that more than half the volunteer’s claimed to be trying to increase their fruit intake while almost two-fifths aimed to eat more vegetables.

In addition to this, Britain could also be on the verge of an obesity epidemic according to researchers. The research called Health of Britain, Perspective on Nutrition 2008 showed that larger clothing sizes are becoming very common with people aged under 25 making up 5% of the group wearing size 18 clothes and larger.

According to the British Dietetic Association, another research found that most adults are failing to meet the government’s recommended daily intake of 18gm of dietary fibre. Consuming a minimum amount, only a third and half of women are eating 12gm of fibre a day.

However TNS also asserts that many people in the country are becoming quite aware of a proper diet. They said that there was a decline of 11% in the eating of snacks over the past three years. It now values the health food market at more than £11bn a year.