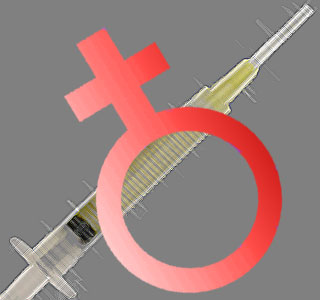 According to a new research published in The New England Journal of Medicine, postmenopausal women may be able to bring their libidos back to life with a testosterone patch.

Experiments were conducted on about 800 postmenopausal women. None of these women were on estrogen. These women were randomly assigned to one of three groups: daily 300 micrograms testosterone patch, daily 150 micrograms testosterone patch, or a placebo patch. Out of these, four have said to have developed breast cancer. Their patches had testosterone on it. Researchers are not certain as to what triggered the cancer cells, was it excessive exposure to testosterone or were the cancer cells already present in the subjects body prior to the experiment. Other side effects have also being reported. Some women complained of increase in the growth of facial hair. In spite of this none have stopped using the hormone. Apart from these problems, the use of the male hormone to boost sex drive in women is not entirely risk-free.

Susan R. Davis, M.D., Ph.D., of Monash University, Australia however says that the chances of 2 out of 814 women, developing breast cancer “is not unexpected”.

Leslie R. Schover, Ph.D., a behavioral scientist at the University of Texas M.D. Anderson Cancer Center, in Houston says, “We do not know if the testosterone patch contributed to proliferation or metastasis of the breast cancer in women diagnosed in the earlier months of the study, potentially affecting their long-term survival. A valid safety study needs at least a five-year follow-up period in a large, randomized trial. If women use Intrinsa without such a trial, I believe they are risking their lives to gain a very modest increase in sexual desire.” Leslie recently wrote an article analyzing the research on testosterone for low libido.

Procter & Gamble Pharmaceuticals gave two different doses of testosterone. Dr. Davis and her colleagues in the United States, Canada, and Sweden, examined these two Intrinsa patch doses. However earlier, this dose was not approved by U.S.’s Food and Drug Administration (FDA) panel. They needed stronger and more powerful evidence to ensure this medication’s safety, and also if it actually helped women’s sex lives. But the researchers have proved beyond doubt that wearing the higher-dose testosterone patch does in fact boost a woman’s libido. Woman’s “satisfying sexual experience” has increased to an average of 2.1 times every four weeks. The rate of women’s satisfaction on placebo patches is said to have increased about 0.7 times. The testosterone doses used in this study are said to both increase desire and decrease distress.

Co-author Sheryl A. Kingsberg, Ph.D., chief of behavioral medicine at University Hospitals Case Medical Center in Cleveland, Ohio says, “Although the change in activity is modest, that’s something that is appropriate and I think most women would be more than happy with it. They wanted to return to the level of desire they had in their premenopausal years, and that’s what they got.”

Dr. Steven Goldstein, an obstetrician and gynecologist at the New York University Langone Medical Center in New York City, called this study “helpful.” He further says, “It shows that in the double-blind, placebo-controlled trial, testosterone does have a positive effect on the frequency of satisfying sexual experiences. But, what about long-term effects? You have to wear this patch all the time. That means you’re subjecting yourself to a hormone 24/7.”

Goldstein wants older people to also understand that “decreased desire is not a disease.” He says that these are evolutionary changes that are responsible for the loss of libido. People should not misconstrue it loss of love for their spouse.
Doctors who treat post menopausal women say that testosterone is recommended for a short time and not for long usage.