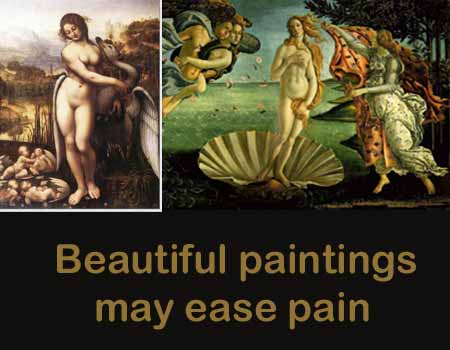 ‘True art takes note not merely of form but also of what lies behind’ so goes a famous quote by Mahatma Gandhi. Well we’d say literally as scientists at the University of Bari in Italy now prove that beautiful paintings may not just lift the spirits but could also act as painkillers.

According to the novel Italian research contemplation of a beautiful work of art may actually ease pain. So now you know that there’s more to beautiful painting than just adorning the walls. The healing powers of gazing at a beautiful piece of art were known for many years, but the new research also claims it offers a distraction from physical pain.

This unique study was carried out by Professor Marina de Tommaso at the Neurophysiopathology Pain Unit and colleagues. The neurologist revealed about the study, “Hospitals have been designed to be functional, but we think that their aesthetic aspects should be taken into account too. Beauty obviously offers a distraction that ugly paintings do not. But at least there is no suggestion that ugly surroundings make the pain worse. I think these results show that more research is needed into the how a beautiful environment can alleviate suffering.”

The study involved 12 volunteers, six male and six female aged between 22 and 38 years. These participants were asked to pick 20 paintings they considered most ugly and most beautiful from a selection of 300 works by artists such as Leonardo da Vinci and Sandro Botticelli. They were then subjected to a short laser pulse at their hand that created a painful sensation as if they had been pricked by a pin while contemplate either the beautiful paintings, or the ugly painting, or a blank panel.

When the subjects gazed at beautiful paintings, they showed a reduced response to pain on electrodes that measured the brain’s electrical activity. Also on an intensity scale of 1 to 3 (one for most intense and 3 for least intense), they rated the pain on 3 for beautiful paintings compared with when gazing at the ugly paintings or the blank panel.

Previous studies claim that a greater part of the brain is lit up when we perceive something as beautiful. When in pain we may be distracted by beautiful paintings. This may be the reason, scientist suggest we feel less discomfort when we look at an attractive piece of art.

So in case you are in pain we recommend some generous portions of art by genius of the likes of Leonardo da Vinci.

The study is published in the paper ‘Aesthetic value of paintings (and) affects on pain thresholds’.