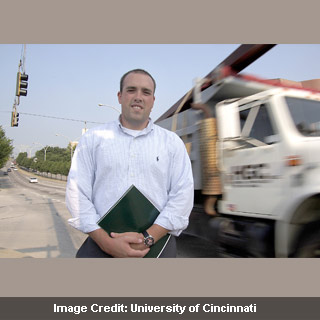 Children exposed to both high levels of traffic-related particles and indoor endotoxin during early life may be six times more prone to suffer from constant wheezing as compared to children exposed to low levels of traffic and indoor-related pollutants. This novel finding was discovered by environmental health scientists at the University of Cincinnati (UC) College of Medicine.

The ‘synergistic’ effect of early-life exposure to both outdoor traffic-related pollution and indoor endotoxin seems to cause more harm to developing lungs than one or the other exposure alone. This study is believed to be the foremost one to examine the combined effects of traffic-related exposures.

Moreover, it was noted to have tested endotoxin in children during infancy as an indicator of asthma later in life. Endotoxin is known to be a component of bacteria thought to generate an immune response in humans. Also, it seemed to have been measured from dust samples collected prior to age 1.

During the study, Ryan along with his colleagues was noted to have utilized land-use regression modeling to evaluate participants’ exposures to traffic-related particles such as diesel exhaust. The model was designed to capture exposures at locations where the child spent more than eight hours a week between birth and age 3. For instance, inside their homes or at day care. Additionally, study participants appeared to have been chosen based on family history and residence’s proximity to a major road.

Lead author of the study, Patrick Ryan, PhD, a research assistant professor of environmental health at UC explained that, “There is a clear synergistic effect from co-exposure to traffic-related particles and endotoxin above and beyond what you would see with a single exposure that can be connected to persistent wheezing by age 3. These two exposure sources—when simultaneously present at high levels—appear to work together to negatively impact the health of young children with developing lungs.”

The findings of the study revealed that approximately 36 percent of the children seem to have stated persistent wheezing at age 3. This constant wheezing appears to be an early warning sign of asthma and other pulmonary conditions. Furthermore, merely 11 percent of children exposed to low levels of both indoor and outdoor allergens were observed to have experienced wheezing.

Ryan further said that, “Traffic-related particles and endotoxin both seem to trigger an inflammatory response in the children monitored in this study. When put together, that effect is amplified to have a greater impact on the body’s response. The earlier in life this type of exposure occurs, the more impact it may have long term. Lung development occurs in children up through age 18 or 20. Exposure earlier in life to both endotoxin and traffic will have a greater impact on developing lungs compared to adults whose lungs are already developed.”

Also, about 18 percent of children exposed to low levels of indoor endotoxin and high levels of traffic-related particles may have suffered from persistent wheezing. Supposedly, endotoxin exposure alone appeared to have little effect.

This study is known to be part of the Cincinnati Childhood Allergy and Air Pollution Study. More so, the large study supposedly is a long-term epidemiological study analyzing the effects of traffic particulates on childhood respiratory health and allergy development.