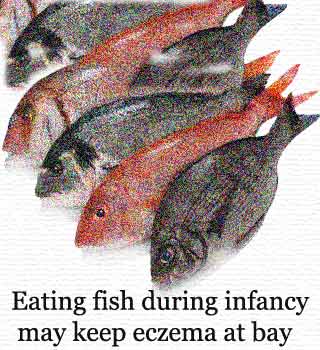 According to a new research the introduction of fish in infancy may help babies stave off eczema. In a research conducted in Sweden, experts have found that if babies are fed fish before the age of nine months, their risks of developing the serious skin condition is significantly lowered.

The long term health of more than 17,000 babies born in 2003 was analysed for the distinct study conducted by Dr Bernt Alm, a pediatrician at the University of Gothenburg in Sweden. Alm and his colleagues interviewed nearly 5000 parents to obtain information about their child’s diet, home environment and any indication of eczema when the child was six and 12 months old. They also checked medical records.

The study’s authors revealed, “The fact that fish is rich in omega-3 fatty acids could partly explain the effects found in this cohort.”

Interestingly the researchers found that at 6 months nearly 13% of families reported their child to have developed eczema. By the time the child was a year old, the instances increased to about 20%. Four months was the average age at which eczema was found to be developed.

The study found that children who were introduced to fish in their diet much before nine months were at a 25% lowered risk of developing the skin condition. They further mentioned that it did matter what type of fish these children were fed-it could be lean, white fish or even oily types like mackerel and tuna.

In addition to fish, the researchers also discovered an eminent role of genes. A child with a sibling or mother who had previously contracted the condition was twice as likely to be affected by eczema by the age of 12 months.

Along the study researchers made another very interesting discovery. They found that having a pet bird also reduced the chances of eczema by about 65%. Researchers assert that’s it quite possible because birds promote exposure to toxins.

The study is published in the Archives of Disease in Childhood.