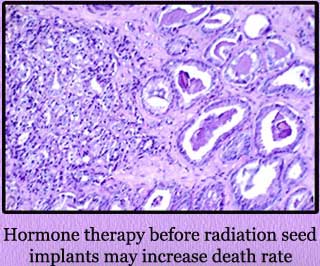 A one of its kind study by researchers on prostate cancer patients suggests that hormone therapy may not be the best technique. The study reveals that the mortality rate is much higher in older men who are in the initial stages of prostate cancer if they are first treated with hormone therapy before treatment of radiation seed implants.

A radiation oncologists places small radioactive seeds into the prostate to kill the cancer cells while the man is sedated in Brachytherapy.

Amy Fox, M.D., lead author of the study and a radiation oncology resident at the Harvard Radiation Oncology Program in Boston, commented, “Our study shows that for men over 70 with early-stage prostate cancer, androgen deprivation therapy as a form of treatment may do more harm than good. n older patients, the risks of androgen deprivation need to be carefully weighed by doctors when designing the proper treatment plan.”

The researcher additionally asserted, “These results are particularly interesting, since two previous studies that examined similar populations contradicted each other in terms of how hormone therapy impacts the risk of death among prostate cancer patients in this age group.”

However the study shows that men in the older age group with localized prostate cancer when treated with both NHT and brachytherapy had a 20% increased risk of dying in comparison to men who were not treated with NHT.

Researchers indicate that these effects must be considered while selecting treatment options since NHT doesn’t actually improve a patient’s chances of being cured.

The study was presented on September 23, 2008, at the American Society for Therapeutic Radiology and Oncology’s 50th Annual Meeting in Boston.