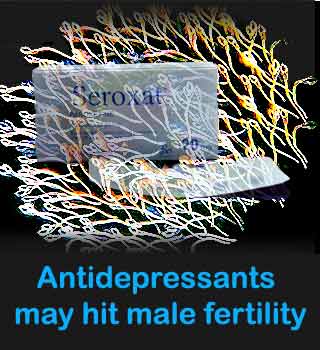 Well in case you are man who relies on antidepressants to fight the blues, you could just be putting your manhood to danger. That’s right. A novel research reveals that men who take the depression pill could be damaging their chances of having children.

The research was conducted by Peter Schlegel of the Cornell Medical Center in New York City. Along with his team, the author administered 35 healthy men doses of a third SSRI called paroxetine, sold as Seroxat or Paxil, over five weeks. They then examined their sperm before the treatment and later after four weeks.

In 1990, Seroxat was seen as a wonder drug, but it was later linked to child suicides, mood swings, nightmares and personality changes. Though the drug is banned for individuals below 18 years since 2003, it is still commonly prescribed to adults.

Initial analysis apparently showed the sperms of the volunteers to be healthy. They considered the amount of sperm, semen and the shape and motility of sperm; all factors were found to be normal. However the team was in for a shock when they observed the DNA fragmentation in the sperm, using the TUNEL method.

The disturbing picture revealed was that on an average, there was a rise in the proportion of sperm cells with fragmented DNA before taking paroxetine after just four weeks. The quantity rose from 13.8% to 30.3%. These kinds of levels of sperm DNA damage have earlier been related to problems like embryo viability.

Janet Morgan, a spokeswoman for GlaxoSmithKline, which sells paroxetine, however mentioned, “This study was not conducted by GSK, and therefore we are currently reviewing the investigators’ findings. We take seriously our responsibility to ensure our medicines are used safely.”

The researchers thus concluded Seroxat apparently gives the sperm more time to develop flaws as the motility of the sperm is slowed down through the male reproductive system.

The findings will be presented at a meeting of the American Society for Reproductive Medicine in San Francisco, California in November, 2008.