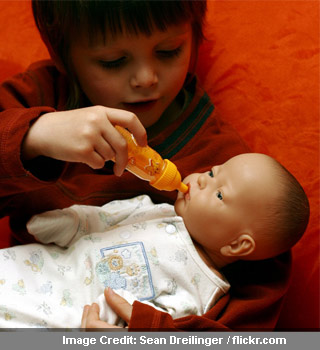 On-the-run lifestyle has got many people using synthetic materials for packaging food. It is claimed that these synthetic packaging materials contain a hormonally active substance bisphenol A, as a result of this the hormone has found its way into the food chain and the human organism as well. A study conducted at ETH Zurich now shows the proportion in which individuals are exposed to the element and the extent to which bisphenol has invaded the human body.

Bisphenol A (BPA) is a significant element in the polycarbonate synthetics and epoxy resins. About three million tons of these resins are being produced annually on global basis. Many plastic objects like medical equipments, baby bottles and food packaging are made from PC synthetic materials, whereas epoxy resins are used to coat food and drink cans and seal drinking water pipelines. Besides entering the human body from the above stated materials, BPA also comes into contact with a human via food packed in synthetic packaging materials and plastic containers.

BPA is an active hormone, and behaves quiet similarly to estrogen or anti-androgen. Thus, BPA even in small quantities can affect sexual development, especially in the case of male fetuses and babies. On the basis of toxicological studies, the European Food Safety Authority has established a limit on the daily intake of BPA, which currently is 50 micrograms per kilogram of the body weight.

Natalie von Gotz, scientist from the Institute of Chemistry and Bioengineering comments that, “However, the limit doesn’t include the studies on the hormonal impact of bisphenol A, which are often difficult to interpret.”

Von Gotz is apparently the first scientist to have worked on the linking of BPA exposure studies to exposure analyses. The goal of the study was to calculate the representative average values for the daily dose of BPA per kilogram of body weight. This study was conducted across nine age groups in Switzerland, Germany and Austria. The team from Konrad Hungerbuhler’s Safety and Environmental Technology Group started off by measuring the individual doses that are absorbed by a particular product.

The scientists measured the BPA concentration in various foods and other relevant sources. The number was then multiplied by the amount absorbed by an individual, which was determined via previous nutrition studies. Lastly, the result was divided by the consumer’s body weight. The team then tallied the individual doses of the 17 sources examined in order to obtain the average daily intake for the respective age groups.

The study threw up results claiming that babies are the ones who absorb the most BPA. As babies are commonly fed through PC bottles, they take in approximately 0.8 micrograms of BPA per kilogram of body weight. However, this amount is well below the prescribed intake amount.

Von Gotz quotes that, “But the latest studies on rats have shown that even low doses can have a harmful impact on the development of the animals.”

The exposure to BPA seems to deteriorate with age, although the study indicates that it also depends on the person’s diet and lifestyle. People who eat a lot of canned food, heat food in PC containers in the microwave or have had a new epoxy resin-based filling appear to be exposed to comparatively higher dosage of BPA. The latest studies have been able to determine how much single sources add to the total exposure in relation to each other, explains Von Götz.

The study also indicates the need to further elaborate on this subject. For instance, BPA is found in canned foods in differing amounts. However it is unclear as to whether the difference is due to the type of can or the processing. The scientists thus are urging industry specialists to come out and share their knowledge on the topic as well. What the scientists are stressing on is that the amount of BPA released in food should decrease. Nevertheless, we cannot completely stop the usage of cans and other PC objects as they have their share of advantages as well.

Von Gotz is of the opinion that future nutrition studies should not only focus on what people eat but should also look into the manner the food is packaged. However it is felt by certain scientists that it is essential to further study how BPA gets into food and the human organism.

The fact that there still remains a need to study such chemicals goes to show that scientists are yet to crack the manner in which these chemicals are absorbed. Moreover, scientists have contradicting views, with one batch advising against the use of such substances, and the other finding no faults with it.