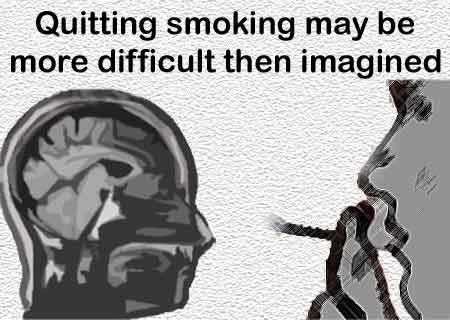 It is a known fact that smoking is extremely injurious to one’s health. A smoker requires a lot of will power and self control in order to give up smoking completely. In spite of the difficulties, if a smoker is successful in giving up smoking, then he may have just done the best thing possible to live a healthy and a full life.

However, a latest Duke University Medical Center research states that an ex-smoker may feel the urge to smoke just by witnessing someone smoking. This is all that takes an ex-smoker to possibly take up smoking again.

Through functional MRI scans, the researchers witnessed the change in brain activity of the smokers when they quit. Brain scans were taken during normal smoking, as well as 24 hours after quitting smoking.

Joseph McClernon, associate professor in the department of psychiatry and behavioral sciences, Duke University Medical Center, says that, “Only five percent of unaided quit attempts result in successful abstinence. Most smokers who try to quit return to smoking again. We are trying to understand how that process works in the brain, and this research brings us one step closer.”

A significant increased activity in the brain is revealed when quitters notice photograph of people smoking. They were scanned every time while being shown pictures of smoking people.

Apparently an activity in the dorsal striatum of the brain was noticed. This part of the brain is involved in learning habits or habitual things like brushing one’s teeth or riding a bike. McClernon says that, when ex-smokers come across these particular cues, an activity in that part of the brain is noticed which is responsible for automatic responses. This evidently states that giving up smoking once and for all may not be a matter of conscious control.

Thus researchers suggest that, in order to aid smokers to quit smoking they should be positively encouraged and also take appropriate steps in order to break their habitual reaction to smoking.

The Duke researchers supposedly are trying to achieve a way in which smokers habitual reaction to smoking can be broken. One area of research is apparently determining to make use of nicotine patches before the act of quitting smoking.

They stated that wearing a nicotine patch and smoking a cigarette with no nicotine, may prove to be beneficial in undoing a smokers habitual reaction to smoking. This method apparently helps smokers stay away from smoking for a longer period of time.

Their study is published online in Psychopharmacology.