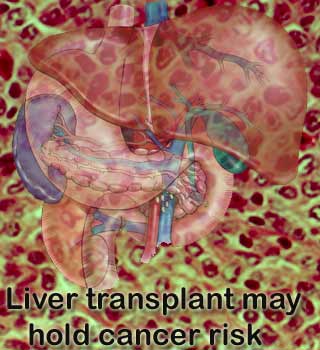 Liver transplant is a common surgery for treatment of patients with serious liver conditions including hepatitis, liver cancer, fulminant (acute) liver failure, cirrhosis and end stage liver disease. However a recent study puts to question this treatment particularly for children as it brings with it an increased risk of cancer.

Led by Helena Isoniemi of Finland, a team of researchers indicate that the chances of developing cancer are upped by three times for people who undergo a liver transplant.

As part of the study, researchers examined nearly 540 liver transplant patients from Helsinki University Central Hospital who had received a liver transplant between 1982 and 2005 at Aberg’s center. The scientists then closely followed these patients to understand the patterns of cancer risks. Among these transplant recipients about 39 cancers in nearly 6 patients was detected. This showed that individuals who undergo a transplant are 2.59 times more the susceptible to cancer as against the normal population.

In the course of their research, experts found that from 4 months to 14 years after the transplant operation, nearly one out of every six liver transplant patients developed some form of cancer. In addition to this researchers also found that compared to older adults, children younger than 17 years were more likely to develop cancer after a liver transplant.

The American Liver Foundation (ALF) suggests that liver transplantation is needed for patients who are likely to die because of liver failure as their diseased liver is replaced with a healthy one. Researchers indicate that further studies are required to ascertain the association of liver transplant and cancer.

The study is published in the October issue of Liver Transplantation, a journal by John Wiley & Sons, Isoniemi.