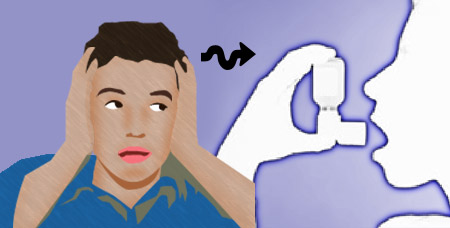 Young people with asthma have double the risk of developing depression in contrast to their peers without asthma. Studies were believed to have shown that depression is linked to increased asthma symptoms and in rare cases it could even lead to death. Apparently, it is still not found how stress and depression play upon one another to worsen asthma.

Bruce D. Miller, M.D., and Beatrice L. Wood, Ph.D., professors of psychiatry and pediatrics in the UB School of Medicine and Biomedical Sciences have planned and carried out a novel study along with UB researchers to analyze this. This new study has revealed that depressed children with asthma supposedly show a dysregulation of the autonomic nervous system along with increased airway adjustment.

This study is believed to be the first one to check ways that connect emotional stress, depressive symptoms, autonomic nervous system dysregulation and airway function in childhood asthma.

“The autonomic nervous system, or ANS, is composed of two opposing divisions — the sympathetic and parasympathetic nerves, which check one another and thus control critical body functions outside of conscious awareness. The ANS is influenced by stress and emotions,” elucidated Chief of the UB Division of Child & Adolescent Psychiatry and senior psychiatrist at Women & Children’s Hospital of Buffalo, Miller.

“Children with asthma and high depression symptoms showed a preponderance of parasympathetic over sympathetic nervous system reactivity in the ANS,” he continued. “This imbalance within the ANS could explain the increased airway resistance that we found in depressed asthmatic children in our study.”

For the purpose of the study, nearly 90 children with asthma in the age group of 7 to 17 years were examined. A comparison was made between forty-five asthmatic children with symptoms of depression to forty-five asthmatic children having no symptoms of depression. The two groups seemed to have viewed frightening, sad (death) and happy scenes from the movie E.T.: The Extraterrestrial.

For the purpose of collecting data on heart and respiratory function, the children were required to wear electrodes. Apparently, the electrodes illustrated the activation level and reactivity of the sympathetic and parasympathetic divisions. Experts were believed to have evaluated airway function before the movie, after the death scene and after the movie.

He further added that, “In contrast, the group without symptoms of depression showed consistent activation of the sympathetic pathway, which would support better airway function under stress. To our knowledge, this is the first report in the literature to demonstrate an association linking stress, depression and increased airway resistance in asthmatic children.”

Study findings in addition showed that parasympathetic reactivity was most distinct in children during scenes depicting family distress or loss, death and dying.

“These findings reinforce previous results from our laboratory that associated relational stress within the family with child depression and increased asthma activity,” says Wood. “Although these findings are promising and support our hypotheses. We need further studies to replicate and extend these findings, and to examine whether treatment for depression reduces shift to the parasympathetic and improves lung function in children with asthma.”

The authors of the study were of the opinion that these findings signify the importance of screening asthmatic children for depressive symptoms. In addition, it appears to be important to have a keen observation over them and providing them with psychosocial counseling when needed.

This study has been published in the July 2009 issue of The Journal of Allergy and Clinical Immunology.