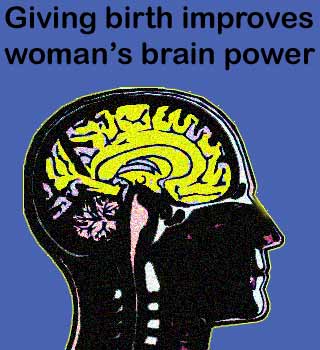 Being a mother may just be a blessing in disguise. Take this word-for-word as a novel research now proves that motherhood acts as a boon to female brain power protecting them against a range of degenerative diseases.

A popular belief is that many would be mothers face fatigue and struggle to carry on even simple daily tasks due to a supposed decline in mental powers during pregnancy. However after giving birth to a baby scientists claim the brain is supercharged and hence prepares women for rearing a child. Conducted by researchers at the University Of Richmond, Virginia, the study involved various studies on rats and primates.

Professor Craig Kinsley, lead author of the research and professor of neuroscience mentioned, “Pregnant women do undergo a phase of so-called baby brain, when they experience an apparent loss of function. However, this is because their brains are being remodelled for motherhood to cope with the many new demands they will experience. The changes that kick in then could last for the rest of their lives, bolstering cognitive abilities and protecting them against degenerative diseases.”

Professor Kinsley and colleagues after analysing the brains of rats and primates suggest that this temporary decline in the brain is actually beneficial to the mother’s brain in the long run. The experts claim that this short term brain deterioration makes the mother braver and up to five times more up front in handling the baby. As compared to their counterparts who had never given birth, mothers in the animal kingdom found it easier to find the right food along with having better spatial awareness.

The study brings to light that giving birth to a baby may in fact bring about an unexpected rush of memory along with improved learning ability making mothers more vigilant and alert. According to the researchers the make up of the brain is literally redone after producing a child. Various areas of the brain undergo a change in shape and size due to hormonal fluctuations during birth and breastfeeding. These changes last for many years boosting a woman’s mental power and protecting them from degenerative diseases.

The researchers associated with the present study assert that temporary decline in memory may be because the pregnant women are growing new sets of brain cells that the researchers call ‘maternal circuits’. Mothers apparently get supercharged ‘computing’ powers because nerve cells in areas known to be linked to parenting also expand and develop more connections with neighbouring cells during pregnancy suggest the study.

Many researches in the past have associated pregnancy with the functioning of the brain with each having their own take on the relationship. While a 2002 study by Angela Oatridge, from Hammersmith Hospital in London, showed brain scans of pregnant women to have a 4 per cent decline in size, a study by two Australian researchers showed pregnant women to consistently perform worse on tests for memory and verbal skills. Yet another study by the University of Toronto found rats that had given birth to be protected against degenerative diseases and finally a report by Thomas Perls, associate professor at Boston University medical school, found that women who become pregnant after the age of 40 are four times more likely to live to 100.

These findings are due to be reported next month at the Society for Neuroscience’s annual meeting.