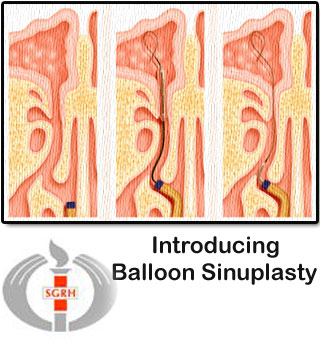 Here’s some great news for the thousands suffering from sinusitis. Doctors at the Sir Ganga Ram Hospital (SGRH) in Delhi reveal the introduction of a novel non-surgical procedure to sure acute to chronic sinusitis called as Balloon sinuplasty.

The new procedure involves a method wherein a balloon is inflated in the affected nasal area thus clearing the blockage. As for Sinusitis, it is a condition in which the sinuses or the cavities around the nasal passage are inflamed. The condition can get really bad if mucus collects in the cavity as it blocks the airway. Its symptoms include headache, nasal blockage, yellow green nasal discharge or post nasal drip, facial pain, pressure, congestion or fullness along with malaise and fatigue.

About the introduction, Dr Shalabh Sharma, senior consultant, ENT, SGRH, commented, “The usual treatment procedure of treating acute or chronic sinusitis is to open the nasal tract in order to reach the blockage and then remove the mucus. It is a painful procedure, and in the course of reaching the spot, some bones may break, leading to a longer recovery time.”

Dr Sharma further reveals, “With mucus collecting in the cavity it becomes difficult for the patient to breathe. And as there is no outlet for the mucus, it begins to rot and starts moving downwards towards the throat. In this condition one is prone to catching viral or bacterial infections. In fact, exposure to dust particles can make things worse for the patient.”

Ballon sinuplasty is a technique in which a wire catheter is introduced through the nostril to move towards to the blockage. The catheter has a balloon in the front which eventually helps clear the nasal blockage.

This distinct technique was introduced by Dr Howard Levine, director, Nasal and Sinus Centre, Cleveland, US and president of American Society of Rhinology. Dr Levine reveals that with balloon sinuplasty, the blockages are cleared with absolutely no need for surgery and patients discharged the same day itself. Claimed to be permanent, cost-effective and with no side-effects, we are glad the technique picks the light of day in northern India.

The technique is expected to cost around Rs.40,000.