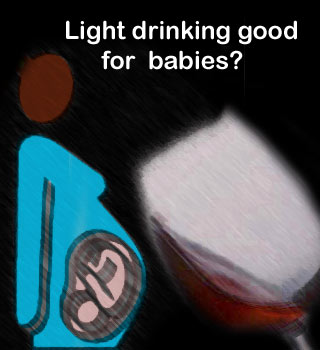 In case you are among the women who enjoy a regular glass of wine, here’s some good news. You may not have to completely give up drinking when you are pregnant. Drink lightly during pregnancy and you could actually be improving your child’s behaviour and vocabulary.

If researchers at the University College London are to be believed then pregnant women who consume small amounts of alcohol occasionally during pregnancy are not risking the health of their baby. In fact their children may not only score highly in tests at the age of three, but will apparently also be better behaved.

Lead researcher, Dr Yvonne Kelly, UCL Epidemiology & Public Health remarked, “The reasons behind these findings might in part be because light drinkers tend to be more socially advantaged than abstainers, rather than being due to the physical benefits of low-level alcohol consumption seen, for example, in heart disease. However, it may also be that light-drinking mothers tend to be more relaxed themselves and this contributes to better behavioural and cognitive outcomes in their children.”

An examination of over 12,000 children showed that throughout their pregnancy if women drank about one to two units of alcohol or one glass of wine a week, they would be doing no harm to their babies. On the contrary, analysis of the three-year-olds suggested that light drinking lowered the risk of problems in children including behavioural problems. As against mothers who abstained from drinking, children whose mothers drank intermittently performed much better in set tests.

The study reveals that in comparison to mothers who stayed completely away from drinks, boys born to light drinkers were 40% less likely to have behavioural problems and 30% less likely to be hyperactive while girls born to light drinkers had 30% lowered chances of psychological problems. Asserting that children may benefit from the odd tipple, researchers however mention that they cannot completely ascertain the child’s better performance was not linked to their family background.

The results of the study are in fact quite contradictory to the government present guidelines that suggest pregnant women and those on the path of conception to completely cut out alcohol from their lifestyles. Miscarriage, stillbirth or permanent damaging to the foetus are some of the widely known downsides of drinking while pregnant.

The research is published in the International Journal of Epidemiology.