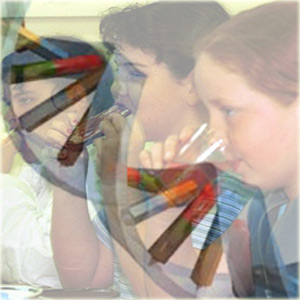 While previous studies have shown that diet and lifestyle influence childhood obesity, a recent one now indicates that genetic factors play a greater role in determining whether a child becomes overweight.

The study, conducted by British researchers looked at over 500 pairs of twin and determined that genes accounted for about three-quarters of the differences in the child’s waistline and weight.

Jane Wardle, director of the Cancer Research UK’s Health Behavior Centre, who led the study said “Contrary to the widespread assumption that family environment is the key factor in determining weight gain, we found this was not the case.”

The cause of obesity, a major problem worldwide that increases the risk of type-2 diabetes, cancer and heart problems was earlier blamed on environmental factors and eating patterns.

The WHO currently numbers around 400 million people worldwide as being obese of which 200 million includes children below the age of five.

The statistical analysis showed the difference between the children BMI (body mass index) and weight circumference were 77 per cent relatable to the genes and 23 per cent because of the environment the child grows up in.

“These results do not mean that a child with a high complement of ‘susceptibility genes’ will inevitably become overweight, but that their genetic endowment gives them a stronger predisposition,” the researchers said.

With the relations drawn, researchers advised parents whose children are at a greater genetic risk than others to support their children by providing healthy lifestyles and environments.

The researchers added that the study showed that it is wrong to place all the blame on the parents for their child’s excessive weight gain.