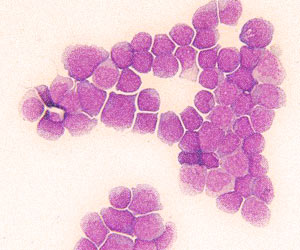 Technology is certainly proving to be a boon for medical science. For the first time ever researchers from the Washington University have decoded the entire DNA of a cancer patient and traced the disease back to its genetic roots. Now that’s groundbreaking news for sure!

As part of the research, scientists from the Genome Sequencing Center and the Siteman Cancer Center at Washington University School of Medicine in St. Louis decoded the genome of a woman in her 50s with acute myeloid leukemia who died later. Analyzing the DNA for variations by taking two samples from the woman revealed surprising results. The team was able to associate nearly eight mutations unknown until now along with two already identified genetic alterations with the blood cell cancer.

Acute myeloid leukemia (AML) just like other cancers is a cancer of blood-forming cells in the bone marrow. Over a period of time mutations garnering in people’s DNA may lead to the condition.

According to lead researcher, Dr Richard Wilson, “This suggests that there is a tremendous amount of genetic diversity in cancer, even in this one disease. There are probably many, many ways to mutate a small number of genes to get the same result, and we’re only looking at the tip of the iceberg in terms of identifying the combinations of genetic mutations that can lead to AML.”

The examination of the DNA sample involved one sample from healthy skin cells and another from bone marrow tissue comprising cancerous cells. The researchers found that there were around nine of the eminent mutations were present in practically every tumor cell. There is very little known about the kind of mutations cells undergo in AML.

While earlier researches have focused on some common points of DNA variation that could be related to disease risk, the present study uses a gene sequencing technique. In this method, the Washington team looked through nearly three billion pairs of chemical bases that contribute to the human genome make up. These held the key to the mutations cancer patient’s cells undergo.

In addition to this, researchers also examined tumor samples of 187 other AML patients. The analysis did not show the presence of the eight mutations. However for the lady three newly discovered mutations marked their existence in genes that are normally associated with suppression of tumor growth. The other four mutations were in genes related to spread of cancer. Transport of drugs into the cells and possibly leading to resistance of cancer therapy may be the affects of yet another.

With millions of people all over the world victims of various types of cancer, researchers are hoping that the innovative technique can be applied to other cancers and thus help in development of specific drugs.

The Nov 6 2008 issue of the journal Nature has published this study.