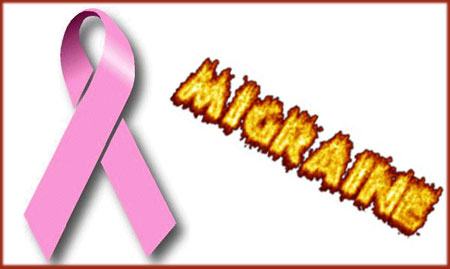 Research published earlier this year showed migraines may increase the risk of heart attacks and strokes in women. Following this research, a study was taken place in order to get an in depth analysis of the situation. This is said to be the first study of its kind on this particular topic. Its also a first study to point out the connection between migraine and breast cancer.

Christopher Li, co-author of this study and a cancer epidemiologist at Fred Hutchinson Cancer Research Center, Seattle says, “It may be the treatments used for migraines that are responsible for this risk reduction rather than the migraine itself. We are interpreting the results with caution.”

It is suspected that the credit for this goes to the non-steroidal anti-inflammatory drug (NSAID) – ibuprofen. Another reason could also be that, migraine sufferers consult their doctors more and are hence more in touch with their body or healthier, and thus stand a lesser chance of developing breast cancer. But Li is quick to point out that women with more frequent visits would probably have more mammograms, which we all know is associated with higher rates of breast cancer diagnosis. He further says, “It would be hard for me to think that that would account for a large portion of what we’re seeing.”

Li along with other researchers from the Washington University and the Fred Hutchinson Cancer Research Centre became aware of the connection between breast cancer and migraines, while surveying many post-menopausal women. Some of these women were diagnosed with breast cancer while some were not. This formed the base of their research. This is also published in Cancer Epidemiology, Biomarkers & Prevention journal.

Dr. Li says, “Migraines seem to have a hormonal component in that they occur more frequently in women than in men, and some of their known triggers are associated with hormones. While these results need to be interpreted with caution, they point to a possible new factor that may be related to breast-cancer risk. This gives us a new avenue to explore the biology behind risk reduction. Hopefully this could help stimulate other ideas and extend what we know about the biology of the disease.”

His study shows that migraine attacks are more likely to occur during the menstrual cycle or during pregnancy, when there is a fluctuation in the level of estrogen hormone. Fluctuations in the hormones are said to be the culprit that triggers migraine attacks or cancer. Dr. Li goes so far as saying that during late pregnancies women having migraine history mostly don’t experience this blinding headache. This is said to occur because of the higher estrogen level during pregnancy.

The researchers hope to pave the way for a better understanding of the connection between the estrogen hormone and the development of breast cancer in the female body; and also hope to develop new ways to decrease the possibility of the occurrence of this disease. But before that they need to be sure about the positive side effects, the NSAIDS seem to be having on the female body.