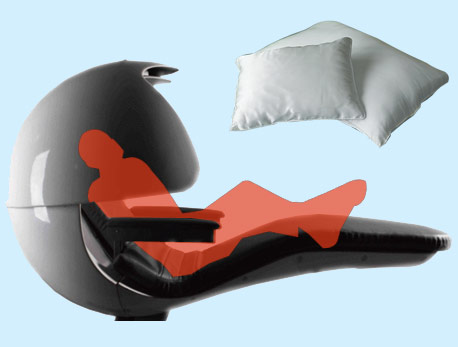 It’s curious in hind sight that Benjamin Franklin said, “Waste not life, in the grave will be enough sleeping.” Curious for it was electricity that perhaps changed man’s routine more than anything else. From the humble light bulb to television and its advanced family of modern day entertainment, our routine is determined more and more by artificial constructs. So much so that the time when the position of the Sun used to decide the very basic activities like sleeping and waking up seems practically primitive now!

The fact that an average person spends one third of his life sleeping has been done to death by all companies from those selling mattresses to those peddling insect coils. But a fact it remains. That is how important sleep is for normal physical functioning and that is precisely why the growing incidence of sleeping disorders is so disconcerting. The immediate word that would come to one’s mind is ‘insomnia’ or ‘lifestyle disorder’. While this is largely true, there are many variables involved.

The Beauty of sleep:

Sleep is believed to be required for everything from simple rest to cognitive brain development. This is probably why kids sleep longer:

During sleep, the body is an anabolic state, as opposed to the catabolic waking stage. Thus, it is also associated with growth and development. Growth hormone secretion decreases with lack of adequate sleep and can lead to obesity. Insulin usage may be affected leading to diabetes. Metabolism is thus is largely affected by sleep and vice versa. How many times have you complained about the large cheese sandwich you shouldn’t have had for dinner?

Blood pressure normally drops during sleep. As a result, insufficiency thereof may lead to hypertension and other cardiovascular problems.

In evolutionary terms, sleeping doesn’t make sense as it would mean elevated dangers of predation. Yet, all mammals, birds and some reptiles sleep. If resting can simply be achieved without shutting off the senses, sleep must have evolved for some other function or functions.

Many leads are yet to be proved definitively. But one thing for sure is sleep definitely decides quality of life and may even decide longevity.

Sigmund Freud said dreams are a cleanser of the mind. If 6 years are spent in this activity, it has to serve some purpose. Historical literature is replete with interpretation of dreams and legends thereof. Freud was amongst the first to take a modern analytical look at it. He may not have been the first but he is certainly the most popular. While contemporary science with the aid of modern technology that monitors brain activity has come much beyond the Freudian theory of repressed desires, it still makes for an interesting read.

Off course, many people still believe in prophecies and bad omens. But nightmares and night terrors can be serious problems.

Recurring dreams another staple of pulp fiction. Too much dwelling on this issue can leave one searching for meanings that are not there.

Dreams are normally associated with REM (Rapid Eye Movement) sleep. This is a stage of sleep when eye movement can be seen under the lids and brain activity is very similar to that while a person is awake. It has been observed that when a person does not get enough hours of sleep including REM sleep, it is observed in subsequent naps. Hence REM sleep including sleep must play a significant function. This is widely believed to be in linking and consolidation of memories and ideas.

Also, the content of dreams has been observed to be the same the world over. It is usually a feeling of falling or being chased, arriving late for an exam etc. and random happenings of the previous day.

Freud quotes Hildebrandt in his book: ‘The most shocking death in our family, the impressions of which keep us awake long into the night, is obliterated from our memories until the first moment of waking brings it back to us with distressing force. On the other hand, the wart on the forehead of a passing stranger, to whom we did not give a moment’s thought once he was out of sight, finds a place in our dreams.”

This backs the consolidation theory which we shall address a little later.

In a competitive world where missing a deadline by a whisker may cost huge to business and being on call means somewhere in the world, a market is always open for business, getting enough sleep is going lower and lower down the priority list. A ‘nine to fiver’ is considered a sleep walker and a round-the-clock jet lag-beater is the hero of the day. Shifts and even time taken out for leisure; albeit forced, are biting into time for rest. So for those wanting to sleep later when they are dead, the good news is they may be headed there sooner rather than later.

While the West has been the trailblazer in all extremes, corporate culture is fast catching on in our country too. In a few years, most corporate hopefuls would realize the true appeal of a Government job.

The Ergonomics and Economics of sleep:

It is estimated that people suffering some or the other sort of sleeping disorder at least on a few occasions in a year; diagnosed and otherwise, may be more than half of the entire population. Rough estimates on burden on healthcare are at 16 billion dollars in the US. Effects on productivity are along similar lines. And we are not even considering run-of-the-mill day time drowsiness here. So while most Companies continue to breathe closer and harder down your neck for those Mach 3 targets, some are realizing the importance of a healthy well-rested employee vis-à-vis the caffeine abuser who is searching for a new job.

Enter the ‘Energy Pod’. No, it is not a contraption from the Star Wars, though it looks like one. It is a state of the art ‘employee rejuvenation device’ (As shown in the picture above).

Now one might say this is just next generation of bunk beds found in BPOs. Such ‘ Sleep Stations’ provide the best ergonomic position to rest in, ear phones and a cover to block out light and sound and a timer that gently wakes you up. But what is different apart from the technology is the companies’ philosophy behind it. Giants like Google and Cisco are looking at such stations at the place of work to help employees gather their thoughts. A little catnap can work wonders is what most of us have heard before. But the role of sleep in linking ideas and boosting cognition and creativity is now being paid heed to. While the sleep and stress management industries rake in the billions, most of us can’t even dream of working for such enlightened employers. However, there other measures that can be taken which we will get to further in this feature and the next one.

It is an expression most of us heard or used some time in our lives. When a big decision is awaiting your anxious reply and the stakes are high, nothing can work better than a good night’s sleep. The fact that a good night’s sleep is hard to achieve in such a dilemma may not be the least of your problems. There is a body of thought that believes the unconscious mind during sleep works on consolidation of ideas and memories. During sleep the mind may make some linkages or leaps that may not be possible in the waking state and you may arrive at a Eureka moment. There have been instances where people have actually reported having stumbled upon miraculous solutions in dreams, woken p and remembered.

Alternately, a rested mind is a better judge of a decision.

‘It is a common experience that a problem difficult at night is resolved in the morning after the committee of sleep has worked on it.’
-John Steinbeck

Is your child sleeping well?

As mentioned earlier children require more hours of sleep. Disrupted or inadequate sleep may have long reaching effects on the child’s mental and physical development. Nightmares and bed wetting are the most common problems. Sleep apnea; i.e. sleep disruption mostly due to snoring is also fairly common and can lead to Attention Deficit and Hyperactive disorder (ADHD), learning problems, bed wetting, headaches etc. Tonsillectomy may be one of the considerations.

In addition, parents who share their bed with children are in danger of developing sleeping disorders themselves. So next time, you take your child to a Pediatrician, be sure to notice and report his or her sleeping patterns to the doctor.

If you’ve taken the time out to read this feature, and are willing to make a commitment to at least try to streamline your routine so-to-speak, the first thing you’ll ask is what do I change and how many hours do I sleep?

There are now studies not only showing that less sleep leads to obesity and other health problems but also hinting that excess sleep (more than 8 hours) may increase mortality. That is a big may!

6.5 to 7 hours is the figure in vogue these days. In the unlikely event that you regularly have a choice of sleeping that long, you may want to reconsider. The issue with such research is that to pinpoint sleep or the lack of it, let alone the exact duration, as the cause or effect of morbidity and even mortality is virtually impossible. But we as a society have come so far beyond the time when sunlight and amount of exhaustion decided duration of sleep that clinical guidance is now important.

And in addition to the duration, the quality of sleep is also equally important. People who say ‘I am a light sleeper’ may be lightly sleeping on a big health issue. It is suggested that stimulating substances such as caffeine and some medications should not be consumed before sleeping. Rather stimulating activities should also be avoided. While that is something open to vivid interpretation, it also seems difficult to follow when the last things you do before sleeping are switch off your laptop or turnoff the latest cerebrally abrasive episode of the daily soap. Don’t go to bed with an empty stomach but don’t over-eat either. Repetitive activities such as concentrating on breathing or counting sheep are advised. But from personal experience, counting sheep can really get to you.

Difficulty falling asleep even when exhausted may be the first sign of a sleeping disorder. How many of us still read a book or write in a diary before going to bed? I personally think writing diaries is only useful when impossible plots of murder mysteries have to have some ending. But the point is such activities have gone from leisure to luxury due to the time crunch. And the writer of this feature is by no measure above it. One needs to do some hard prioritizing on how much to attempt to do on a given day and if multi-tasking is really working. In the long run, the decision may even be of what you really want in life! Waking up to the importance of good sleep might make the biggest difference in your life.