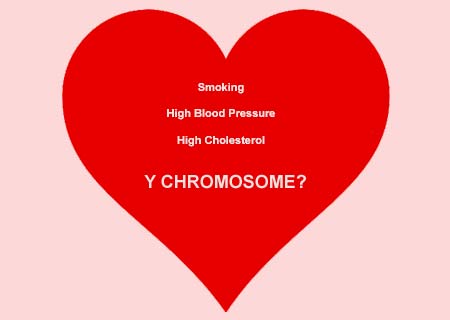 Most of us believe that healthy diet and exercise could keep heart diseases at bay. But, in an important investigation by scientists at the University of Leicester, it came forward that coronary heart disease (CHD) may be due to inheritance.

The Y chromosome is a portion of DNA that is prevalent only in men, which could contribute to the passing on of heart disease across generations, the scientists claimed. DNA specimens of more than 3,000 men were examined by experts. They found that 90% of Y chromosomes in the UK belonged to either haplogroup I or haplogroup R1b1b2.

Principal investigator Dr Maciej Tomaszewski, a clinical senior lecturer at the University’s Department of Cardiovascular Sciences, quoted, “We are very excited about these findings as they put the Y chromosome on the map of genetic susceptibility to coronary artery disease. We wish to further analyse the human Y chromosome to find specific genes and variants that drive this association.”

According to the observations, men who carried a Y chromosome from haplogroup I apparently possessed 50% higher CHD risk, than those of the other group. Certain risk factors like smoking, high cholesterol and blood pressure were excluded from the trial.The team claims that the increased risk may be due to haplogroup I’s effect on the immune system and inflammation. The scientists added that the analysis is important as it unleashed a new role of the Y chromosome in the cardiovascular mechanism, apart from being considered as a marker of the male gender.

This report is published in the journal, The Lancet.