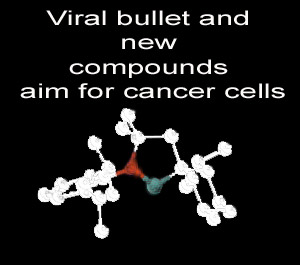 According to a latest research, a breakthrough in the use of viruses to target and destroy cancer cells has been reported. This is called the oncolytic virotherapy.

The research team was led by Dr. John Hiscott of McGill’s Faculty of Medicine and the Lady Davis Institute, along with Dr. John C. Bell and also colleagues from the University of Ottawa and the Ottawa Health Research Institute (OHRI) are a part of this latest research. They have discovered that a variety of compounds called histone deacetylase inhibitors (HDIs) could be the missing link that turns oncolytic viruses into a powerful new weapon against cancer.

Dr. Hiscott says, “One of the greatest challenges in cancer therapy is to target and kill cancer cells that are resistant to conventional therapy. The strategy that we developed is to use a harmless, non-human virus that specifically enters, replicates and kills cancer cells, but not normal cells.” On the other hand, Dr. Hiscott says that a lot of primary cancers have proven immune to an unmodified virotherapy approach. He further says, “One way to overcome this obstacle is to treat the tumor with other molecules that augment the ability of these viruses to target and kill the cancer cells.”

Senior researchers and lead authors in the Hiscott and Bell labs, Dr. Nanh Nguyen and Dr. Hesham Abdelbary mainly concentrated on HDIs. They restrict certain enzymes which are involved in modulating the structure of chromosomes in cancer cells. They tested the combination HDI and virotherapy approach in cell culture experiments in the lab. They tested them in animal models of cancer as well as in human tissues from breast, prostate and colon cancer, instantly after removal from the patient.

Dr. Hiscott says, “Treatment with these compounds dramatically increases the susceptibility of these cancers to killing by the oncolytic virus. The combination dramatically and unexpectedly stimulates the ability of the viruses to target and kill cancer cells.”

The researchers make use of a small, bullet-shaped insect rhabdovirus known as VSV. This was specially selected because of its incapability to infect normal human cells. The researchers are hopeful that this new methodology to cancer may progress into a speedier implementation of new therapies for breast, colon and prostate cancers among others; which are presently immune to virotherapy. The researchers believe that these experiments are crucial to determine whether “viral bullet” is really the “magic bullet” that hits a bull’s eye.

Their research program is supported by the Canadian Oncolytic Virus Consortium, which is funded by the National Cancer Institute of Canada (NCIC) and the Terry Fox Foundation.

Their results were published in the September early edition of the Proceedings of the National Academy of Sciences (PNAS).