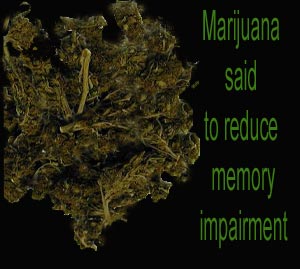 Ohio State University has revealed that according to their latest research, specific elements of marijuana are good for the aging brain. It is believed that they reduce inflammation in the brain and maybe even encourage the formation of new brain cells.

Tetrahydrocannabinol (THC) is similar to nicotine, caffeine and alcohol as agents that, when taken in moderation, have shown some protection against inflammation in the brain, which may mean a better memory later in life.

Gary Wenk, professor of psychology at Ohio State and principal investigator on the research, says that, “It’s not that everything immoral is good for the brain. It’s just that there are some substances that millions of people for thousands of years have used in billions of doses, and we’re noticing there’s a little signal above all the noise.” Wenk has discovered that THC-like synthetic drug improves memory in animals. His team is now trying to figure out how it works in the brain.

Yannick Marchalant, a study coauthor and research assistant professor of psychology at Ohio State, says that, “When we’re young, we reproduce neurons and our memory works fine. When we age, the process slows down, so we have a decrease in new cell formation in normal aging. You need those cells to come back and help form new memories, and we found that this THC-like agent can influence creation of those cells.”

Marchalant conducted a test on rats. He used the synthetic drug, WIN-55212-2 (WIN), which is not used in humans because of its high potency to induce psychoactive effects. The researchers used a pump under the skin to give the rats a dose of WIN constantly for a period of three weeks. A low dose was given to the animals so that it does not induce a psychoactive effect. On the other hand, another group of rats received no dosage at all. The rats were then placed in a small swimming pool to see how well they can make use of the visual clues to help them find the hidden platform under the surface of the water. As assumed the treated rats did better than the controlled rats. They more easily learnt and remembered the technique to find the hidden platform.

Marchalant says that the end aim is to not propose THC dosage to treat Alzheimer in humans. He says that they need to be sure of exactly which receptors are important and which drugs especially activate these receptors. He says their team hopes to soon discover a compound that will aim both neurogenesis and inflammation. This would be an effective way to generate the finest effects, according to him.

The research was presented in a poster presentation at the Society for Neuroscience meeting in Washington, D.C.