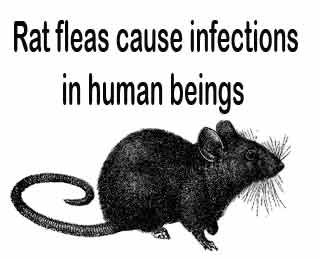 Rat fleas spread bacteria that can cause grave heart diseases in humans, this has increased a concern that the infections could prove to be very harmful to the human body. A new research assumes that brown rats maybe responsible for the spread of this disease. These rats are very huge and are commonly found in Europe.

Since almost two decades back, 20 species of Bartonella bacteria have been uncovered. They cause diseases from heart diseases to the infection of the spleen and nervous system.

Professor Chao-Chin Chang from the National Chung Hsing University, Taiwan says, “A new species called Bartonella rochalimae was recently discovered in a patient with an enlarged spleen who had traveled to South America. This event raised concern that it could be a newly emerged zoonotic pathogen. Therefore, we decided to investigate further to understand if rodents living close to human environment could carry this bacteria.”

Scientists have unveiled a number of diseases caused by rodents. Although uncertain about the main route of transmission, they believe it is spread through fleas. Rodents carry several pathogenic species of Bartonella, namely B. elizabethae and B. graharnii, which cause endocarditis and neuroretinitis respectively in humans. The flea, Ctenophthalmus nobilis, lives on bank voles. This flea transmits different species of Bartonella bacteria. It is said that these pathogens have been discovered in fleas that live on gerbils, cotton and brown rats.

Professor Chang says, “We analyzed bacteria found in Rattus norvegicus in Taiwan. The brown rat is also the most common rat in Europe. By analyzing the DNA of the bacteria, we discovered a strain that is most closely related to B. rochalimae, which has been isolated recently from a human infection in the United States.”

Professor Chang concludes by saying that since a small sample size was used in this particular study, they cannot be absolutely positive that the brown rats are the cause for the spread of B. rochalimae. But he also says that various different Bartonella bacteria are being spread by rodents. This study makes one realize that there are other miscellaneous reservoirs and vectors that are responsible for the spread of this infection. Thus he concludes by saying that this topic requires a detailed analysis and investigation.

This research was published in the Journal of Medical Microbiology.

Cellular mechanism may be liable for altering permeability of blood vessels